Harry Cohen, MP for Leyton and Wanstead, became the most punished MP of all those disgraced in the expenses scandal. He was told by the Parliamentary authorities that he should forfeit his Â£65,000 allowance (known by some as a “golden goodbye”) which he was due to receive when he stands down at the next election. They say he wrongly claimed more than Â£60,000 of public money by claiming a second home allowance on his constituency home. He had said his main home was in Colchester, but in fact that house was let for long periods.

He told the Mail on Sunday, which highlighted Cohen’s case last year, he was the victim of ‘class discrimination’.

‘I give enormous value for money for my constituents, bringing millions of pounds into the local economy and public services.’

The Tory candidate for Leyton and Wanstead, Ed Northover, told the Wanstead Guardian that he thought Mr Cohen had “got off lightly”.

This is a very severe sanction indeed. However, I can’t help thinking that Mr Cohen has got off lightly. He may be losing 65 thousand but he has made gains of several hundred thousand over the years.

On Friday, Mr Cohen apologised in the Commons, saying:

“I publicly apologise to my wife Ellen, who is taking a lot of the flak. This situation is not her fault and she has suffered as a consequence. I am deeply sorry about that. Finally, I have the greatest respect for Parliament and would not intentionally have wanted to do anything to tarnish its reputation. I am sorry if I have done so.”

UPDATE MON 1 FEB: Harry Cohen’s personal statement to the Commons is here, courtesy of They Work For You.

* Meanwhile there is debate over who should succeed Mr Cohen as Labour candidate. This week the Labour party decided not to have an “all-women” shortlist – seen as a move likely to favour Harriet Harman’s husband, union leader Jack Dromey, who is a likely candidate (the Telegraph: “Harriet Harman’s husband Jack Dromey may benefit from feminist retreat”). It’s the only remaining seat in London which hasn’t got a Labour candidate.

*Other news: The rector of the parish of Wanstead, Canon Robert Springett, is to leave his post at Easter to become Archdeacon of Cheltenham

*A dozen wards of Whipps Cross hospital have been closed to visitors and new admissions – and there are reports of security on the doors to enforce the ban – after an outbreak of the winter vomiting bug. Statement from the hospital here. 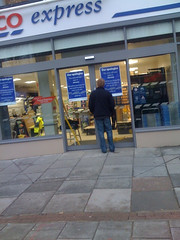