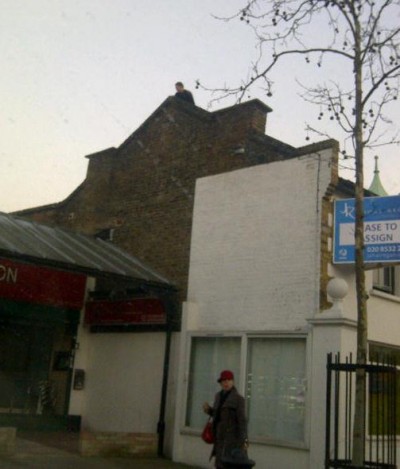 Free-running, the kind of trendy yet suicidally risky sport where people leap like Spider-Man across enormous distances has apparently reached Wanstead.

Noel McManus of One Deko, a regular Wansteadium reader, took this photo on Tuesday evening and reports the following:

Have a look at this guy by the chimney in the photo. I was on the High St this evening at around 5.30 when I first spotted him on the roof of the opticians. Then about 10 minutes later I was in the traffic queue for the lights when I saw him on the street outside (the now closed) Cinnamon. Suddenly he shimmied up the pole supporting the canopy at the front of Cinnamon, ran up the edge of the glass roof and then climbed onto the roof of 149 (which used to be Randalls). I managed to get this pic. Itâ€™s all happening here.

Did anyone else see anything? Are you the mysterious Spidey? Will you clean Wansteadium’s gutters? Contact us at wansteadium@gmail.com

1 thought on “Free-running? In Wanstead??”