The Co-op, currently an increasingly tatty-looking Somerfield, has applied to put new signs on its shop. The question of what kinds of signs Wanstead shops have is a vexed one, especially for the Wanstead Society, which ran a competition last year to encourage a “smarter High Street”.


The Co-op’s designs are available to view on the Redbridge-i website, and though much larger and (literally) greener than the existing Somerfield signs, will not be illuminated plastic boxes – they will be lit with spotlights. This may be cheering news to those who thought the High Street was in a spiral of aesthetic decline.
The council is inviting comments on the application now.

Wansteadium reported last week that the Wanstead Guardian had tracked down Piers Pereira, who was named in a mischievously doctored Wikipedia entry about South Woodford. Mr Pereira blamed his friend Sean Preston, who has had the chutzpah to write to the Guardian this week explaining his actions (no link available). He writes that his time living in South Woodford has been “the worst five years of my life, mainly due to the lobster-like majority that inhabits the area”.

He says he’s leaving and is moving back to Zone 2, “a mythical land of opportunity and natural complexions”. He adds:

“I find the women of South Woodford to be vulgar in appearance and thus, unlikely to encourage the desire within me requisite for courtship. In short I’m too cool, dashing, intelligent and outright good-looking to find a suitable life-partner in the area.”

Good line here in a Wanstead Guardian story about someone being up to mischief on Wikipedia, writing that “South Woodford is notable for its lack of good looking women… [h]owever, the average beauty of women is on a level par with men, as Piers Pereira brings down the average for men significantly”.

The paper has tracked Pereira down, and his reaction is a worthy one:

Mr Pereira, 26, of Elmhurst Drive in South Woodford, said: â€œIt was one of my mates who set me up â€“ his name’s Sean Preston â€“ and I know it’s him because he’s the only one of my friends who can spell.

Passengers were stuck for two hours in a Central Line train outside Liverpool St on Wednesday. The Evening Standard reported that the driver couldn’t even contact control to inform them the train was stuck.

The story that Susan Boyle’s cat is now living in Wanstead became an internet meme, spawning links and reports on Twitter and beyond.

The Labour party has published its shortlist for candidates for the Leyton and Wanstead constituency. On it, according to the Labour Home website, are

Four architects firms have plans for converting the United Reformed Church halls on Grosvenor Road, after they were bought by the owners of Woodbine Place’s Treehouse Nursery. They plan to use it as an after-school club.

Plans have been published for the empty row of shops opposite Snaresbrook Tube (see them here on Redbridge council site). They are to be knocked down and turned into flats. 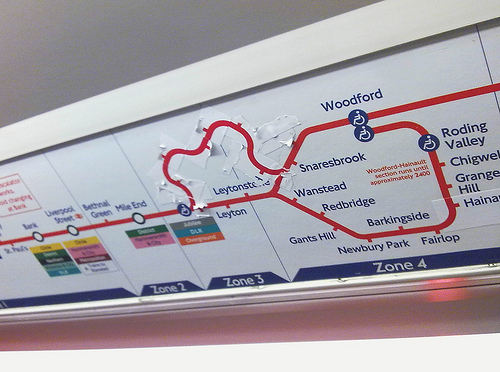 A bit of creative journey planning – but seems a long way to go to avoid Leytonstone. Spotted by Pavendeep Singh earlier this week. (Pav on Flickr)

Wanstead blogger Mark Samuels has recounted in literary style his dispute with the South Woodford Waitrose over a Â£25 parking fine he received for overstaying the two hour limit – even though he spent all of that time in the shop.

But he writes that even though it’s left him “angry and push[ed] me to write a load of stuff on my blog about how disappointed I am”, he’s not going to change his shopping habits. “Iâ€™m not going to cut off my nose to spite my face; I like your shops,” he tells them.