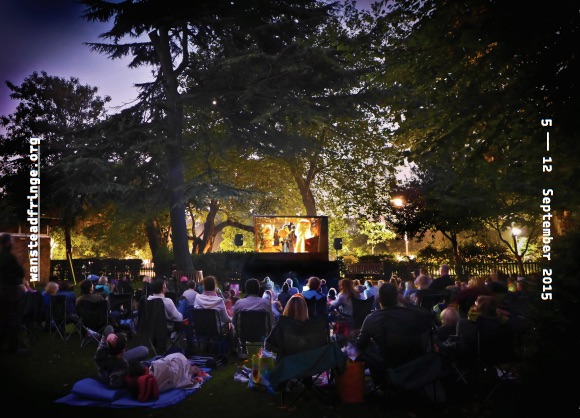 Right, hereâ€™s the first information about the Wanstead Fringe dates. Consider it your privileged information as a reader of Wansteadium.

As you may be aware, the third Wanstead Fringe takes place between Sat 5 September and Sat 12 September, the eight days leading up to the Wanstead Festival, which is on Sunday 13 September.

There are more than 25 events planned for that week, with possibly more to follow. But here are some key dates you wonâ€™t want to miss.

Put those dates in your diary now.

*There are again two nights of comedy, Thursday 10 September and Saturday 12 September, the Fringe finale at which Paul Sinha will make a triumphant return

*A night of local accoustic bands – Fringe Benefrets – returns on Friday 11 September, held for the first time at Manor House

*Thereâ€™s food for your brain too, with conversation about memories of fathers (starring our local MP) on Weds 9 September, and a night of bring-your-own poetry on Monday 7th.

*This time next week there will be Wansteadâ€™s first Jumble Trail, across the whole of Wanstead, Aldersbrook and Snaresbrook. More than 50 people are already signed up – you can see a map of them and sign up yourself here.

*A big picnic on Sunday 6 September for the whole of Wanstead on Christchurch Green with musical treats. Plus the first Wanstead Fringe Book Swap – come along and give a book to someone you donâ€™t know. Any leftovers will be donated to our friends at the Oxfam shop.

*Photo and craft events galore, plus puppetry for children, champagne tasting, opera for the more discerning, and more besides (including a street party).

The whole line-up is now available at wansteadfringe.org and the programmes are now being distributed. Make sure you get one – among other things it will let you get discounts/treats during Wanstead Restaurant Week.

Yes, you may be wondering what you did, as a Wanstead resident, to be this lucky.

The answer is that a group of your neighbours decided to get together to arrange things. Itâ€™s as simple as that. Some local businesses – in particular Petty Son andPrestwich – coughed up to pay the bills. And then people like you decided to come along.

â€œBut is it too late to get involved?â€ you may be wondering. â€œNo!â€ is the answer. We have need for people with the following skills/callings:
*Flat bed truck and driver – we need to transport hay bales for the Kinema
*Hands – we need to hand out programmes to commuters
*Windows – we need people with windows to display our posters (download and print your own here)
*Actors – we have a plan that we donâ€™t want to say too much about at this stage, but do get in touch. Actors who are prepared to have a go with a new script especially written for the occasion
*Stewards – we need DBS-checked people to help at one of our bigger events
*Jumble trail participants – will you set up a stall, or visit those others are running?
*Money. To be honest although this list of events sounds impressive and weâ€™re grateful to our sponsors, this whole thing is run on a shoestring. If you have some money, the longterm viability of the Fringe would be grateful of it. You can donate using the button below. Or if you would like to take out an advert on the Fringe website and app, get in touch with us at info@wansteadfringe.org