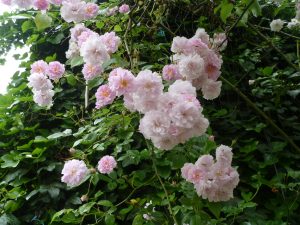 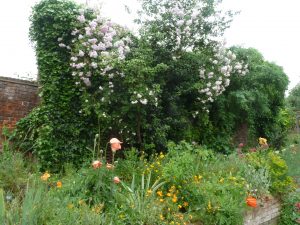 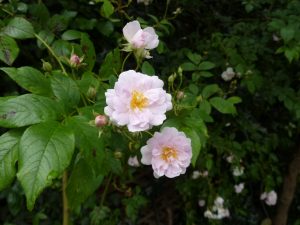 Please take a look at the back garden of the Corner House. At the moment, Paul’s Himalayan Musk a wonderful rambler rose is rampaging along the wall and along the tree canopies. Planted winter 2012, it’s a thug of a rose, can go to 40 feet in length. At the moment it’s heading towards the house but suspect it has its sights on Woodbine Place and the buses.

This is a rose with local connections. Ok, it does come from the Himalyas so not obviously local. The clue is in the name Paul. The Paul family were local nurserymen based in Enfield, a father and sons each with their own specialities. The business thrived in Victorian times (a time of great plant expeditions) and finally finished in the 1930s. This rose came on the market in 1876 and is a gem. It has just one flush of flowers a year and blooms abundantly, hanging sprays of blush pink rosettes with a wonderful musk perfume. When I first planted it, I was concerned to give it something to climb. Didn’t want it rampaging all over the car park. The wall I wanted it to climb is very old from a previous house on the site in the 18th century. I didn’t want to drill holes in it so we had to think of something else. Luckily, my next door neighbours had the builders in and one was a great plant lover.  Pete trotted his ladder up the road, climbed atop the wall and positioned a section of wire fencing weighed down on the other side of the wall with hanging extruded bricks.  A great way of providing trellis without drills and screws. Maybe I should patent the idea!  The wire fencing, I’d hoiked off a dump bonfire. It had gone rusty so doesn’t show at all against the old bricks. Paul’s Musk had climbed this support and was up and running along the wall in no time at all.

We have another of the Paul offspring in one of our beds around Wanstead Station. Susan Winch-Furness planted two small trees, Paul’s Red May in the bed on the corner of The Green (leading to St. Mary’s Avenue). The flowers are doubles and aren’t actually red but are a rich dark pink. This is a Hawthorn and flowers in May. 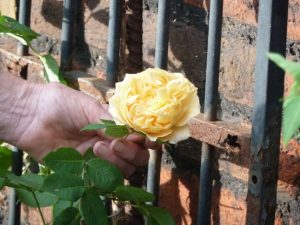 Another climbing rose, also a 2012 addition to the Corner House Garden.  This was planted in the front against the old wall between the betting shop and the house.  I assumed that wall to be in full sun, not realising that the Ladbrooks building projects just a couple of feet but enough to limit the amount of sun and light to that patch of wall. The princess was not amused and refused to flower.  A couple of years ago, I moved her to the centre of the wall for more sun. She sulked a bit but now has quite a regal looking old metal gate to climb. I didn’t like to tell her that this too was hoiked off a dump. What would us gardeners do without everybody else’s throw aways?  Now for the first time, she is flowering, quite shyly, just two sprays of apricot-orange blooms against the dark old wall. It’s a start and with encouragement, we hope she will do better.

A water butt has just appeared fully connected in the Corner House front garden.  What a  mystery but a welcome one.  For years, we’ve wanted a rain water butt but our ambitions were thwarted by the fact that the classy Corner House guttering and down pipes are not standard size and the down pipe is not in line with the drain!  Endless problems. Suddenly, a butt has appeared.  I suspect the council, very welcome. John Start the Community Property Manager has known for some time that we wanted a water butt. Perhaps he was giving us a birthday present!  They did not agonise about matching up the classy non standard size downpipe which had brought my attempts to a crashing halt. They just used some sort of adaptor into standard size black plastic drainpipes with a nice little elbow heading straight for the non aligned drain. Classy, it is not but are we happy?  Yes of course.