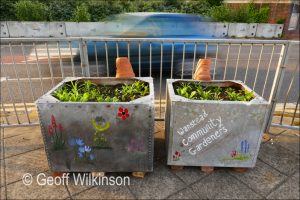 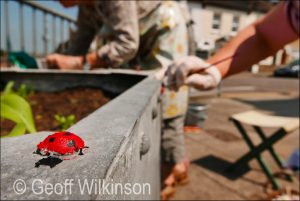 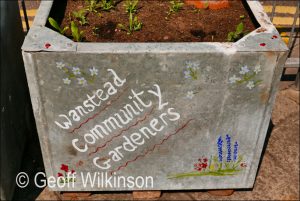 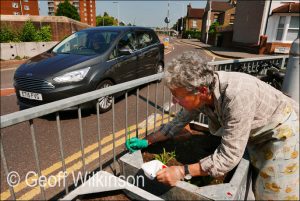 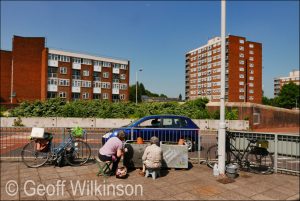 Above photos by Geoff Wilkinson. 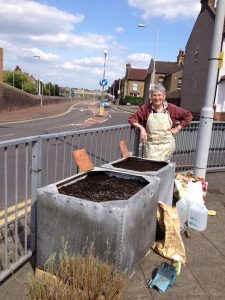 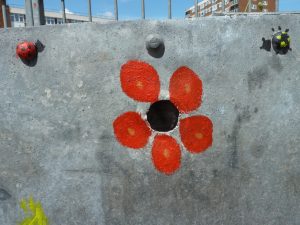 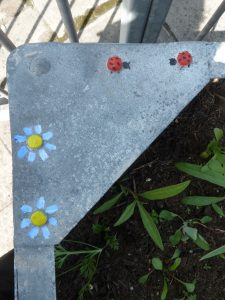 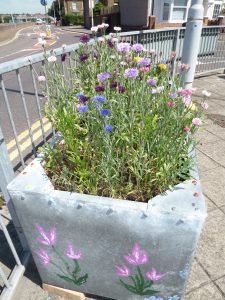 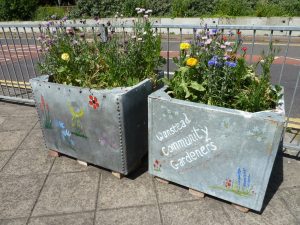 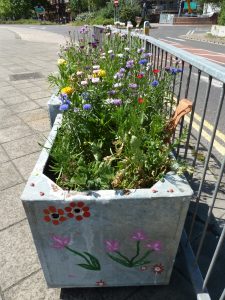 The first road past Wanstead Station in the direction of Redbridge is Mansfield Road. For some reason, the pavement there is very wide but it’s an area of hard surfaces, brick, paving, asphalt lots of traffic and no green.

Last year, we had been searching for a water tank to use for a reservoir for our station beds. That had left us with two excess tanks. The germ of an idea began to develop. The tanks would make perfect street planters, sitting neatly by the railings and filled with the same wonderful seed mix which has delighted passers by in the Fountain Beds on George Green. However, from the germ of an idea to the completion is quite a journey.

First, a meeting arranged by Cllr Sheila Bain who’s very supportive with a  council officer who needed to check that the sight lines of drivers would not be compromised. No problem there. Thumbs up. In fact he thought it was a really good idea. We decided to make it a Mansfield Road project. Flyers were designed, printed and delivered so that everyone knew what was happening and hopefully helpers would come forward.  First out of the woodwork was Ricky, a builder. He offered to operate on the tanks, cut off the pipes, drill holes for drainage and deliver them to the corner on our action day, 30th April.  We had decided that the action would happen all on one day to avoid the possibility of having our street planters hoiked off by metal collectors.

The ingredients for this particular pie were, one third hard core for drainage, two thirds top soil, finishing with a thin layer of seed compost. The hard core was collected from a demolished house, just half bags full as that’s all we could lift. We found a convenient top soil mine in Grosvenor Road. Sarah and Richard had rather over estimated their need for top soil and were happy for the excess to go for the greater good of Wanstead. Again, half sacks only – top soil is heavy.

On the big day, tanks, hardcore and soil congregated on the corner and all was put in place according to the recipe. We had to wait for the soil to settle before seeding so broken flower pot signs informed the public what was going on. Most people were very excited about this and could see the possibility. Just one person thought the tanks were o ugly and should be moved. He didn’t volunteer to do it himself though. Finally, seeds were scattered and fingers crossed. The soil was kept watered and strangely enough, no litter appeared in the tanks.

A couple of days ago, the Wanstead Community Gardeners hard core painting team set to with brushes and colours to add cottage garden flowers, beetles, ladybirds and the odd spider to the tanks. A passer by said “It makes you smile just to look at it” and kids love finding the insects. So the flowers are there even while the seedlings are just making up their mind what to do.  A bit more delightful quirkery for Wanstead. Water tanks make wonderful street planters and there’s room for more on the corner. I wonder how long it will be before we see street tankery arriving in other areas.