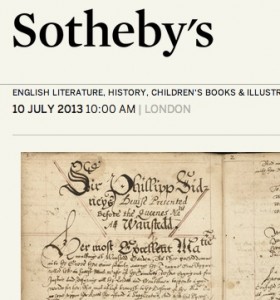 UPDATE: As sharp-eyed readers pointed out, the document smashed its estimates and sold for Â£58,750. Obviously it’s the Wanstead effect.

Forget old Wanstead Tube signs. Chuck away commemorative Wanstead coasters. If there was Top Trumps for real classy Wanstead memorabilia, this would win in every category. And it will only cost you an estimated Â£10,000.

Today Sothebys in London will auction a 1610 manuscript of Sir Philip Sidney’s one act play The Lady of May which had been performed in front of Queen Elizabeth I at Wanstead Hall in the 1570s. The play is also set in “Wanstead Garden”. Â The Sotheby’s image is available in high resolution so it should be possible to decypher the lettering, though that will not be a simple task except for the most ornate of handwriters.

2 Comments on "A classy bit of Wanstead memorabilia"