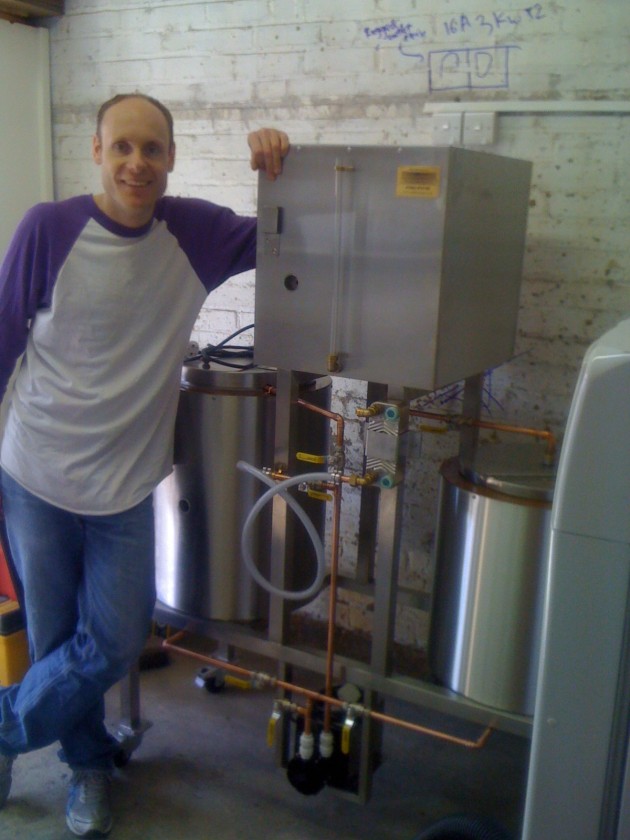 Iâ€™m 37 years old, originally from Yorkshire and Iâ€™ve lived in East London for 11 years ; seven in Hackney and the last four in Wanstead. My background is in financial services â€“ I was a City fund manager for nine years most recently, investing in Chinese and Asian equities, but in August I gave that up to launch Upstart Brewing.

Iâ€™ve been brewing at home for 10 years â€“ I started when I went back to Uni to do a Masterâ€™s degree and when I figured out my budget I couldnâ€™t afford beer! Iâ€™m pretty much self-taught from books and experimentation. I started to get â€˜seriousâ€™ about five years ago, when I bought a commercial pilot line and stuck it in my garage. That really got me hooked on the quality and variety of beers which I could produce, and I began to think that I could do something with my hobby. I find that brewing really stimulates the senses, gives you a real physical sense of tiredness and achievement and you end up with a superb end product!

My wifeâ€™s from Santa Cruz, California, so I was also travelling there regularly and being influenced by what was being done with beer on the West Coast. The last five years have coincided with that West Coast revolution coming â€˜homeâ€™ (as least as far as IPA is concerned) and a real explosion in brewing in London. I like the beer from the new group of London brewers, but I think mineâ€™s just as good, and Iâ€™d like to get it out of my garage and into peopleâ€™s glasses! I think my recipes are a little bit different in that Iâ€™m trying to be a bit more â€˜Europeanâ€™ â€“ the US influence is good but it really dominates the new breweries now, and Iâ€™m personally getting a little over beer which tastes like grapefruit juice.

So â€“ the concept is that Iâ€™m going to take the recipes Iâ€™ve developed in my garage and produce them on a bigger scale for sale. For starters, Iâ€™ve been contract brewing (i.e. brew my recipes on someone elseâ€™s kit) with Andy Skene at Pitfield Brewery, who is a top brewer with 30 yearsâ€™ experience and has a five barrel plant (c900 litres/batch). So far Iâ€™ve brewed two beers with him, a 4.3% pale ale, Upstart Alpha, and a 4.8% German Schwarzbier, Upstart Beta, and Iâ€™m working on a third, Amber beer. My aim is to get these out to the beer drinkers of Wanstead and East London in cask and bottle, share the joy I feel about beer and really demonstrate that there is a market for these recipes.

Iâ€™m running a party on Saturday 7 December, and I want to start doing more events around beer in Wanstead and environs. The concept for Saturday is really a mini-beer festival â€“ itâ€™s my beer plus those of Andy Skeneâ€™s and some others brewing at his plant -Â  if it gets support Iâ€™d like to get some other breweries in and do it regularly e.g. monthly/quarterly.

Parallel with that, Iâ€™m looking for industrial premises to set up a brewery of my own. Initially, I may use my pilot line, but Iâ€™m planning on putting in a larger kit so that I can do commercial scale production of my beers.

Iâ€™m not convinced thereâ€™s a huge profit in beer – I think Pliny the Elder said â€˜fortune favours the braveâ€™, shortly prior to getting taken out by some hot pumice â€“ but this is a real vocation for me, and the craft of it beats the hell out of the daily Central Line grind, a Bloomberg screen for a best buddy and a Pret sandwich for lunch.

Hereâ€™s a brief description of the two beers:

Upstart Alpha: A quadruple hopped 4.3% Pale ale made with Magnum, Fuggle and Hallertauer hops on a base of Belgian Aromatic and Wheat malts.

Upstart Beta: A 4.8% German-style dark beer made with chocolate malt and black malt and dry hopped with spicy Tettnang. 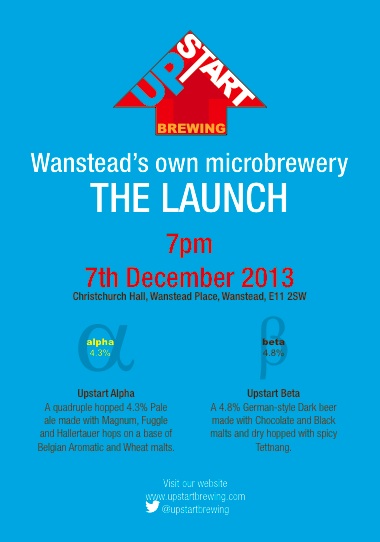 2 thoughts on “A microbrewery for Wanstead”