Baking a cherry pie at fair time is a relatively ancient Wanstead tradition, it’s thought. Â It was the memory of a particularly fine pie (or “pey”) which is believed by some to be the explanation of the inscription on the side of the George Inn. 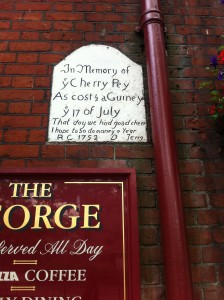 Wansteadium thought this was a tradition worthy of reviving, and so encouraged people to bake cherry pies for the Wanstead Village Show, which took place two weekends ago.

The winner – to whom we had promised a degree of local celebrity – was Kathryn McKenna.

So we are very pleased to name her the first Cherry Pie Champion Baker of the modern era. We will be presenting her with her prize of half a guinea (53p, rounded up). 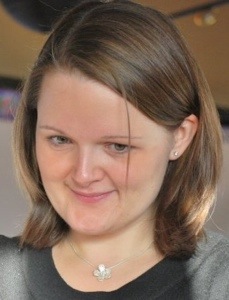 Kathryn’s own report on her pie is as follows: “I didn’t really follow a specific recipe as my practice one was a bit dull. I made a standard sweet pastry and filled it with canned cherries that I had stewed in sugar, blackcurrant cordial, maple syrup and cinnamon. You get a lot of leftover juice but it got poured on on a roasting leg of lamb the next day!”