Thursday marked the first anniversary of Westfield in Stratford – apparently 47m people have visited in the 12 months. 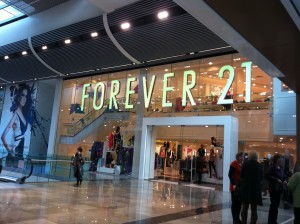 Â At the time of its launch, some predicted doom for high streets nearby the giant shopping centre, especially since parking is free and uncomplicated there, while steadily less available here.

Yet despite everything that’s gone on in Stratford in the past year, armageddon has not hit. There have been some closures in Wanstead, but some new openings as well. And people seem to value their high streets as much as ever.

Wansteadium idly wonders how many people in Wanstead have held out from sampling Westfield’s delights. Are there even 10 people who are Westfield refuseniks – or perhaps have just not had reason or chance to go there yet? Wansteadium personally doubts it, but would be very interested to hear from any readers who are – tell us your reasons using the form below or via Twitter (@wansteadium). We may draw up a list – and we’ll probably call it the NotYetField Ten. Make your entries now.

2 Comments on "Anyone in Wanstead NOT been to Westfield?"