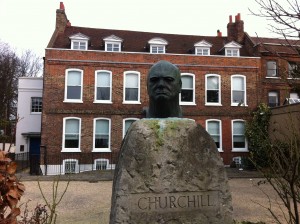 It’s 50 years this month since Winston Churchill’s death, and Wansteadium is going the extra mile for the people of Wanstead by reading Churchill: The Member for Woodford by David A Thomas which tells the story of his relationship with his constituency.

(Though out of print, the book can be bought from Amazon here, in physical or electronic form.)

Episode two.
Yesterday we left our hero returned to Parliament after repeated electoral defeats in various constituencies. He was on his way to becoming a fully fledged Conservative, having served as a Liberal cabinet minister several times. He was accepted by the Epping constituency, which was in those days massive, but then again only men were allowed to vote. But by the end of 1924, he was back in the Commons. Thatâ€™s where we got to.

Stanley Baldwin was the new prime minister. Some in the party didnâ€™t want to give Churchill a cabinet post. Churchill himself wasnâ€™t sure if he would accept a minor role or should hold out for a biggie. In the end, Baldwin asked him: â€œWill you go to the Treasury?â€ Thomas reports: â€œChurchill records that he would have liked to have replied: â€˜Will the bloody duck swim?â€™ Instead, upholding the formality and the importance of the occasion, he replied more appropriately, â€˜I shall be proud to serve you in this splendid Office.â€™â€

Not everyone was happy though, even in the constituency. He tried charming people – even going to the Cowslip Road Branch annual general meeting in the Latchett Hall (a tin hut which was the forerunner to the Latchett Evangelical Church just off George Lane in South Woodford). Cowslip Road had its own branch! In his first Budget he restored the Gold Standard (pegging the pound sterling to the value of gold with the aim of retaining Londonâ€™s financial dominance). Then came the National Strike, and Churchill turned his hand to being a newspaperman, producing a daily news sheet called The British Gazette. This is while he was also being chancellor of the exchequer. In Wanstead, as in other places, the paper was distributed by volunteers.

There were no winners from the National Strike, really, and Churchill said the year was â€˜harassing, worrying and disappointingâ€™ when he spoke to constituents in what Thomas describes as â€œthe dingy Drummond Rooms in Wanstead close by Christ Church Greenâ€. Any Wansteadium readers know where the Drummond Rooms were? It was at this time that women over 21 were given the vote. Any guesses as to how our greatest leader referred to this landmark in British democracy? “The flappers’ vote.” (In his defence, he does not seem to have been alone in using this term.)

And so this second instalment ends with Churchill in 1928 addressing the Aldersbrook Branch of the party in 1928 when he delivered the following speech warning about disarmament. Thomas refers to it as The Aldersbrook Fable, and the Churchill Centre’s archives report it as follows:

Once upon a time all the animals in the Zoo decided that they would disarm, and they arranged to have a conference to arrange the matter. So the Rhinoceros said when he opened the proceedings that the use of teeth was barbarous and horrible and ought to be strictly prohibited by general consent. Horns, which were mainly defensive weapons, would, of course, have to be allowed. The Buffalo, the Stag, the Porcupine, and even the little Hedgehog all said they would vote with the Rhino, but the Lion and the Tiger took a different view. They defended teeth and even claws, which they described as honourable weapons of immemorial antiquity. The Panther, the Leopard, the Puma, and the whole tribe of small cats all supported the Lion and the Tiger.

Then the Bear spoke. He proposed that both teeth and horns should be banned and never used again for fighting by any animal. It would be quite enough if animals were allowed to give each other a good hug when they quarreled. No one could object to that. It was so fraternal, and that would be a great step towards peace. However, all the other animals were very offended with the Bear, and the Turkey fell into a perfect panic.

The discussion got so hot and angry, and all those animals began thinking so much about horns and teeth and hugging when they argued about the peaceful intentions that had brought them together that they began to look at one another in a very nasty way. Luckily the keepers were able to calm them down and persuade them to go back quietly to their cages, and they began to feel quite friendly with one another again.

In tomorrow’s riveting instalment, Churchill has strong views about Gandhi, socialism, Nazis, and the size of meeting halls in Wanstead.