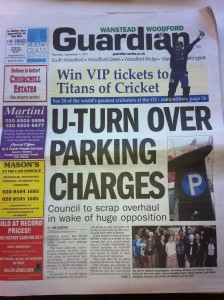 Hurrah for the Wanstead and Woodford Guardian, which has been named as the UK’s local paper with the largest INCREASE in circulation for the first six months of 2011 – a whopping 27.1% boost.

Just seven per cent of local newspapers in the country saw circulation increases – for most of them it’s a time of relentless decline, with some seeing double-digit falls. A combination of readers and advertisers migrating to the internet, general advertising gloom and economic conditions are meaning that even some free papers are being closed by owners.

The Wanstead Guardian has achieved its increase despite all this, and competition from the Woodford edition of the Recorder, which is available free in Wanstead. The good news is however somewhat tempered by the fact that the circulation, following the increase, stands at a relatively modest 4,354 each week.

Wansteadium readers will no doubt have various theories as to the cause of the increase, which you are welcome to share here.