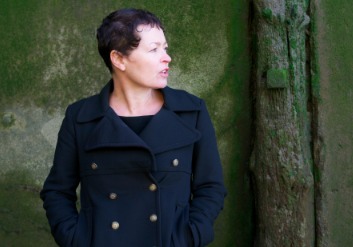 The second novel by Anya Lipska, left, was published on Thursday, and Wansteadium is delighted to be publishing an exclusive extract. Death Can’t Take a Joke sees the return of private investigator Janusz Kiszka and ambitious detective Natalie Kershaw, who were introduced in Lipska’s acclaimed debut Where the Devil Can’t Go. The book is set largely in and around Walthamstow – and Hollow Ponds in particular. Wanstead (Lipska’s home) also appears.

We’re also delighted to announce that Anya Lipska will be reading from the book and discussing it at a Wansteadium event at the Larder next Thursday night, 3 April, from 7pm. Entry is free.

But for now read on. In this chapter, Janusz Kiszka is at the Walthamstow home of a close friend who’s been murdered when a mysterious woman turns up to lay flowers. Note: Contains strong language. In both English and Polish. 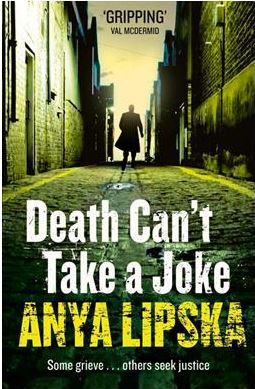 Janusz gazed out of the bay window that framed the tiny front garden and flower-strewn wall like a tableau. Through the half-closed slats of the blinds a young woman came into view, slowing to a halt in front of the wall. She stooped to lay something, and he saw her lips moving, as though in silent prayer. There was something about her that caught his attention. It wasnâ€™t just that, even half-obscured, she was strikingly beautiful; it was the powerful impression that the sadness on her face and in the slope of her shoulders seemed more profound â€“ moreÂ personalÂ â€“ than might be expected from a neighbour or casual acquaintance of the dead man.

â€˜Basia,â€™ he growled in an undertone. â€˜Do you recognise that girl?â€™

Basia frowned out through the blinds, shook her head. Outside, the girl bent her head in a respectful gesture, crossed herself twice, and turned to leave.

Driven by some instinct he couldnâ€™t explain, Janusz leapt up from the sofa and, telling Basia that heâ€™d phone to check on Marika later, let himself out of the front door. The girl had nestled a new bouquet among the other offerings, but her expensive-looking hand-tied bunch of cream calla lilies and vivid blue hyacinths stood out from the surrounding cellophane-sheafed blooms. After checking that there was no accompanying note or card, he scanned up and down the street. Empty. Crossing to the other side of the road, he was rewarded by the sight of the girlâ€™s slender figure a hundred metres away, walking towards the centre of Walthamstow.

Gradually, he closed the gap to around fifty metres. By a stroke of luck, a young guy carrying an architectâ€™s portfolio case had emerged from a garden gate ahead of him so that if the girl happened to glance behind sheâ€™d be unlikely to spot Janusz. From the glimpses he got he could see that, even allowing for the vertiginous heels, she was tall for a woman, her graceful stride reminiscent of a catwalk modelâ€™s.

The girl passed the churchyard that marked the seventeenth-century heart of Walthamstow Village, where the breeze threw a handful of yellow leaves in her wake like confetti, but she didnâ€™t take the tiny passageway that led down to the tube as Janusz had half expected, heading instead for Hoe Street. Once she was enveloped by its pavement throng he was able to get closer, taking in details such as the discreetly expensive look of the bag slung over the girlâ€™s shoulder and the way her dark blonde hair shone like honey in the morning light.

Then a black Land Rover Discovery surged out of the stream of barely moving traffic with a throaty growl and came to a stop, two wheels up on the pavement, ahead of the girl. The driver, a youngish man with a number two crew cut, wearing a black leather jacket, jumped out and went over to her. When she shook her head and carried on, he walked alongside her, talking into her ear. A few seconds later, she tried to break away but he put a staying hand on her upper arm, a gesture at once intimate, yet controlling. She didnâ€™t shake it off, instead slowing to a halt. From the angle of his head it was clear the guy was cajoling her.

Janusz could make out a densely inked tattoo on the back of the guyâ€™s hand, which disappeared beneath the cuffs of his jacket, and emerged above the collar. A snake, he realised â€“ its open jaws spread across his knuckles, the tip of its tail coiling up behind his ear. The girlâ€™s head was bent now, submissive. After a moment or two, she gave an almost imperceptible shrug, and allowed herself to be ushered to the car.

She climbed into the back seat where Janusz glimpsed the outline of another passenger â€“ a man â€“ before the Land Rover slid back into the traffic. He cursed softly: with no black cabs cruising for fares this far east, he had no way of following them. But twenty seconds later, just beyond a Polish sklepÂ where Janusz sometimes bought rye bread flour, the Land Rover threw a sudden left turn that made its tyres shriek.

Janusz doubled his stride towards the turnoff. When he reached the corner it was just as he remembered: the road was a dead-end, and the big black car had pulled up not twenty metres away, its engine murmuring. He stopped, and pulling out his mobile, pretended to be taking a call. Through the rear window of the car, seated next to the girl, he could see a wide-shouldered, bullet-headed man. Judging by his angrily working profile and her bowed head, she was getting a tirade of abuse. Even from this distance the man gave off the unmistakable aura of power and menace. When he appeared to fall silent for a moment, the girl turned and said something. A swift blur of movement and the girlâ€™s head ricocheted off the side window. Janusz clenched his fists:Â the fucker had hit her!Â Only a conscious act of self-control stopped him sprinting to the car and dragging theÂ skurwielÂ out to administer a lesson in the proper treatment of women. A half-second later, the kerbside door flew open and he pushed the girl out onto the pavement. The door slammed, the car performed a screeching U-turn, mounting the opposite pavement in the process, and sped off back to Hoe Street.

Janusz could restrain himself no longer: he jogged over to where the girl half-sat, half-sprawled on the kerb, her long legs folded beneath her like a fawn. She looked up at him, a dazed look in her greenish eyes, before accepting his arm and getting to her feet. Her movements were calm and dignified, but he noticed how badly her hands were shaking as she attempted to button her coat.

He retrieved one of her high-heeled shoes from the gutter and, once he was sure she was steady on her feet, stepped back. The last thing she needed right now was a man crowding her personal space.

â€˜Can I do anything?â€™ he asked. â€˜I got the number plate â€“ if you wanted to get the police involved, I mean?â€™

She touched the side of her head â€“ the bastard had clearly hit her where the bruise wouldnâ€™t show â€“ and met his eyes with a look that mixed resignation with wary gratitude.

â€˜Thank you,â€™ she said finally, her dry half-smile telling him that the police werenâ€™t really an option. â€˜It is kind of you. But really, is not a problem.â€™ Her voice was attractively husky, with an Eastern European lilt â€“ that much he was sure of â€“ but not entirely Polish. If he had to lay money on it heâ€™d say she hailed from further east, one of the countries bordering Russia, perhaps.

As she dusted the pavement grit from her palms his eyes lingered on her fine, long-boned fingers. Then he remembered why he had followed her in the first place: to find out her connection to Jim and why she would leave a bunch of expensive flowers in his memory. He was tempted for a moment to broach it with her there and then, but some instinct told him that a blunt enquiry would scare her off.

â€˜Allow me to give you my card, all the same,â€™ he said, proffering it with a little old-fashioned bow. It gave nothing away beyond his name and number and offered his only hope of future contact with the girl. â€˜In case you change your mind â€“ or should ever find yourself in need of assistance.â€™

She took the card, the wariness in her eyes giving way to a cautious warmth.

â€˜Thank you,â€™ she said. â€˜A girl never knows when she might need a little assistance.â€™ And pocketing it, she turned, as graceful as a ballet dancer, and started to walk away.

â€˜May I know your name?â€™ Janusz asked to her departing back.

For a moment he thought she wasnâ€™t going to answer, but then, without breaking step, she threw a single word over her shoulder.

Death Can’t Take a Joke is published by The Friday Project.

One thought on “Exclusive: The return of Kiszka and Kershaw”