A large public meeting at Wanstead Library on Monday gave residents the chance to quiz the bosses of London City Airport over planned alterations to their flightpaths. This is Wansteadium’s attempt to explain what the changes are and how much they will affect E11.

What’s being proposed?
A consultation of people living under flight paths from London City Airport is taking place because it plans to change the air traffic control system it uses. The new higher-tech method, known as RNAV, will mean planes flying in “more reliable, repeatable and predictable flight paths”, ie they will deviate from the ‘proper’ route much less. Â This will give the planes “increased track conformity” – which is great if you’re an air traffic controller but maybe not so great if you live along that track. In the airport’s own words, the proposal will mean “a reduction in the overall area regularly overflown but an increase in the concentration of overflights in some areas”. And guess what? Parts of Wanstead fall into both categories.

Why the change?
RNAV uses higher standard technology, involving satellite and ground radio beacons. It means planes can fly to within a tenth of a nautical mile from where they should be. But it’s not really new technology that’s forcing the change now: European rules say that all air traffic control must be upgraded by 2020, and in the airport’s view the change is “mandatory and inevitable”. Protesters say the airport should instead consider introducing multiple flightpaths, and believe their campaign “is winnable”.

So there would be winners and losers?
There would. The map below shows two sets of flightpaths out of London City Airport. One runway is called Runway 27. The other is called Runway 9. (Runways 1-8 and 10-26 do not, and never have, existed.) The thick black and blue lines show pretty much where, following the changes, nearly all flights would go. The much wider shaded areas show where, using a less sophisticated air traffic system, planes currently go. After the changes, people living in the shaded areas may well see and hear far fewer planes than they do now. But those who live directly under the thick lines may well see and hear far more planes. NB. Our map is not 100% accurate.Â If you want to get a better idea of where the lines go, check the official consultation documents where there are higher resolution maps. It gets interesting from page 22 – though to be honest the resolution is not high enough to pinpoint streets.

How many planes are we talking about?
It’s a bit variable, depending on the weather. For roughly two-thirds of the year, planes take off from Runway 27. From it there would be somewhere between 97 and 114 planes a day heading on the black line and between 30 and 37 on the blue line. From Runway 9, which is used on average for a third of the year, there would be between 30 and 37 flights a day on the blue line. Â In short, some days there might be no planes overhead from City Airport. On others there might be more than a hundred. Sorry not to be able to make it simpler. And in any case these figures do not take account of a planned expansion at the airport.

How high are the planes?
It’s only planes taking off from London City Airport – not those landing – that should be coming over Wanstead. But by they time they reach us they should be higher than 3,000 ft. Clearly if you live closer to the airport, they will be lower. Even 3,000 ft is close enough to hear, though. Excuse us a couple of hand-drawn diagrams. (If you’re a graphic designer with a passion for infographics, forgive us and please do get in touch.) 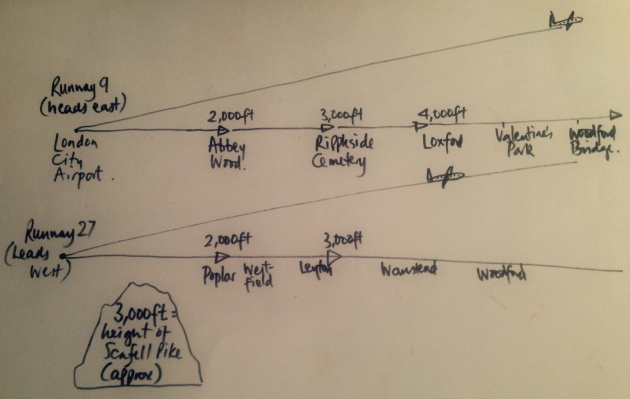 How noisy are they?
Planes are definitely audible in Wanstead, and campaigners have in the past found relatively high noise pollution from planes in other parts of east London. There are several factors which will vary how the noise affects people… how good their hearing is, how loud their TV/children/Spotify are, how good their double glazing is, which way the wind is blowing etc etc. Â And actually, of course, what kind of plane is flying. More airlines at London City are now using jets, which are noisier than the twin props flown by some airlines. And don’t forget that a big factor is simply how much the noise bothers people… if the noise of a plane doesn’t bother them they probably won’t notice it at all. If it does bothers them, they’ll notice every flight and will not be happy if there are a greater concentration of planes above their house.

When is this all going to happen?
If it goes ahead, it would start by the end of next year. Campaigners however say that the airport has not done enough to consult people and that the whole process should be re-run. Failing that, the consultation will end at the end of November.

Will this be an end to the matter?
No, it’s not. The airport has plans for a 50% increase in its capacity to 120,000 planes a year, thoughÂ that is not covered by the current consultation. And it’s not only planes from London City that go over Wanstead. Planes landing at Heathrow also come overhead – in fact campaigners say that parts of east London are as badly affected as areas much closer to Heathrow. Waltham Forest, for instance, is said to be the third worst affected borough in London. And further off, a commission set up by the government is still considering what is the best future for London’s airports more generally; it has, though, decided against endorsing Boris Johnson’s favoured option of an island in the Thames Estuary.

Did Wansteadium get anything wrong here? If we did, drop us a line at info@wansteadium.com

39 thoughts on “Explained: Changes to flightpaths over Wanstead”