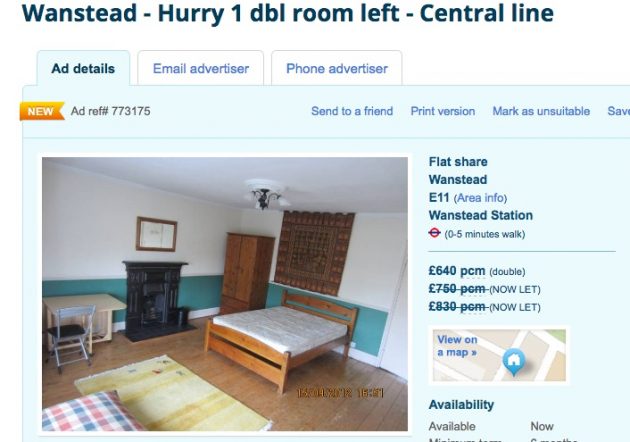 A property listing for a house in Grosvenor Road makes a startling claim. It says the property is:
[su_quote url=”http://www.spareroom.co.uk/flatshare/flatshare_detail.pl?flatshare_id=773175&search_id=353463652&city_id=&flatshare_type=offered&search_results=%2Fflatshare%2F%3Foffset%3D30%26search_id%3D353463652%26sort_by%3Dage%26mode%3Dlist&”]…a smart fully furnished 3 bed character flat once occupied by Charles Dickens! [/su_quote]

Can this be true? And if it is, why isn’t it common knowledge?

It’s perhaps surprising, but yes it appears to be true, at least in part. Documents dating from 1869 which were sold by Bonhams for £840, indicated that Dickens’ did purchase a new villa in Grove Road (now presumably Grosvenor Road).

The description of the documents by Bonhams says:

[su_quote]Dickens’s signatures stand at the head of both these documents concerning the sale of the “detached Villa residence” at No.16, subsequently No.18, Grove Road, Wanstead. The first is signed in his characteristic turquoise ink, without flourishes, the second in brown ink with the usual flourished underlining.[/su_quote]

The documents explain, the auctioneer said, that the author acquired an interest in November 1860, that the property was on a new road, was unoccupied and had only recently been built. But there is a mystery over the transaction because the solicitor involved wasn’t Dickens’s usual trusted lawyer. There could however be an explanation, the firm said.

[su_quote cite=”Bonham’s auctioneers” url=”https://www.bonhams.com/auctions/16761/lot/133/”]A possible motive may lie in Dickens’s affair with Ellen (Nelly) Ternan, whom he had met in 1857. She is recorded as having retired from the stage in 1860, that is at about the time that Dickens made his Wanstead investment. He is known to have bought the Ternan family a house in St Pancras, transferring the lease to Nelly on her coming of age on 3 March 1860. But for a house where he could stay with her, he seems to have preferred places further out from central London, renting for her, under the pseudonym ‘Charles Tringham’, properties in Slough and Peckham. So, just possibly, it was his love for Nelly Ternan that gave Dickens this taste for the suburbs; and that it was their future together he had in mind when making his Wanstead investment.[/su_quote]

So he owned and may well have stayed at the property, though he may not have occupied it for very long. It is thought by some that he gave readings at an archery ground and lodge which later become Wanstead Quaker Burial Ground, the site of the current Wanstead Quaker Meeting hall on Bush Road.

As ever, anyone who knows more about this subject is very welcome to get in touch to share their knowledge. Email us at info@wansteadium.com.

9 thoughts on “Huh?? Did Charles Dickens really live in Wanstead?”