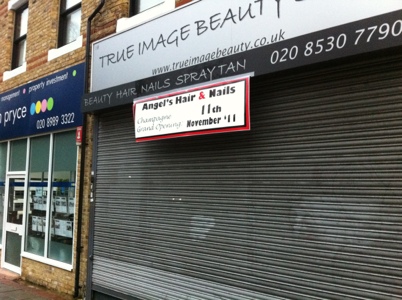 The re-opening of a Wanstead nail bar is still planned for the day when the nation pauses to remember the war dead, but will not be until after the two minutes’ silence at 11am.

Wansteadium reported yesterday that flyers were being handed out for the renovated high street shop, announcing the opening for the 11th of the 11th at 11am.Â  The sign at the shop, in the former Horsfall and Wright premises, this morning indicates it’s all going still going ahead on Friday, but a posting on the shop’s Facebook page clarifies that it will be after the silence.

Any information can be sent to wansteadium@gmail.com