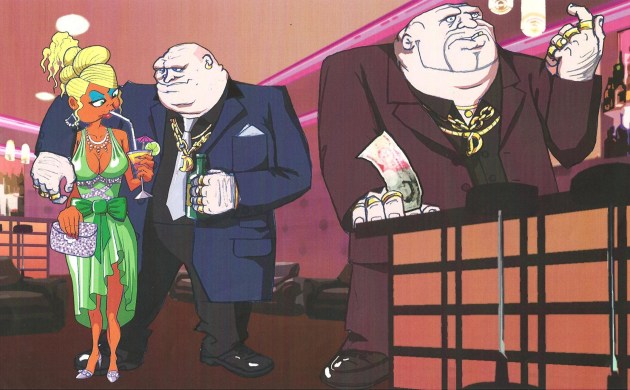 You may find a new series of online comedy animations set in the “Wanstead/South Woodford/West Essex area” diverting. The cartoons are about a family of villains who have relocated from their old East London base to kind of round here, where they are trying to go straight.

The series, known as The Bruvs, are written by longstanding comedy writer Ian Brown and drawn by Eoin Clarke (the second Eoin on Wansteadium this week – what are the chances of that?). Ian Brown says: “They are embracing frothy coffees, cargo shorts and cafe society, but are struggling to leave their past behind. Any violence is now generally between the main characters.”

He adds: “People in this area might recognise elements of the characters but we’re not mocking anyone. We love these folks… particularly Chanterelle our West Essex Girl.”

The films are being released one a month, and are being made on “less than a shoestring budget”. Brown adds: “It seems amazing that America can produce hit cartoon series like The Simpsons, South Park, Family Guy, American Dad and Bob’s Burgers and in the UK we don’t really have anything that has taken off in the same way. It would be crazy to compare TheBruvs to those hit shows, but we would like to develop these characters and possibly make longer films in due course.”

You can see the films at TheBruvs.com, get more info on Facebook or Twitter, or indeed watch the first of the cartoons below.