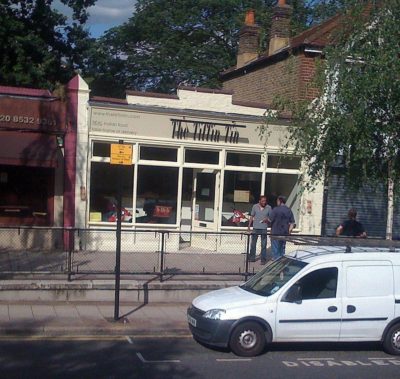 The reviews of the new shopfront are glowing – and expectations of the restaurant itself are high, eg this tweet below:

Tiffin Tin comes to Wanstead. OK, this is getting serious now. PROGRESS.less than a minute ago via web


As the photos above demonstrate, the environment of the Snaresbrook end of the High Street is pretty desperate, so it’s no wonder people are so welcoming of the new entrant.

So one question remains: what’s the food like? Wansteadium welcomes reviews from anyone who’s tried it – either via comments on this post, via Twitter (@Wansteadium) or if you prefer to be anonymous, via e-mail: wansteadium[at]gmail.com.

“I went to check out Tiffin Tin yesterday (Saturday) evening after looking through online comments on the company’s three existing branches (in Hornsey, Tufnell Park and West Hampstead), which were pretty uniformly enthusiastic. It should be noted here that Tiffin Tin is NOT a sit-down restaurant, but take-away only.

The new shop front is attractive and tasteful. The interior consists of a counter stretching the full width of the shop, with the open kitchen area behind. It’s rather similar in that respect to Oriental Chef, the long-established take-away further down the High Street.

I placed an order and was told that the waiting time would be approximately 15 minutes for collection, or 45 minutes for delivery to my home. I opted to wait and watch.

Despite the fact that it was rather early in the evening (I arrived around 6:30), the restaurant was quite busy, with a steady stream of personal callers and telephone enquiries. My order took a little longer than I had been told (20-25 minutes), but I was given a couple of updates on progress, so I was not unhappy. The kitchen was an unending hive of activity, and it was actually quite interesting to watch how the orders were processed, assembled and dispatched.

The starter was larger than average, the main course dishes about average. Two complementary poddadums were included, with small pots of mint raita and mango chutney. This was easily enough for two people (or, in my case, two meals for one person).

For a starter I had vegetable deurali, which consisted of potato fritters and spicy onion rings. This was tasty, but might perhaps have been slightly crisper…? It was also just a little oily. Not bad, though.

My main course was murga mirchi, a chicken dish in a spicy tomato-based sauce. I liked this – it’s not dissimilar to something I have occasionally cooked myself.

Accompaniments were pilau rice and a plain naan, which were good but unexceptionable.

As a side dish I had hariyali daal, a simple dish of lentils and spinach. I thought this subtly flavoured, with a pleasant consistency. Very nice, in fact.

I’m not easy to please – I take a serious interest in Indian food, and sometimes cook it myself. My overall verdict was: OK to good for the starter, good to excellent for the rest.

Everything at Tiffin Tin is bright, clean and new, and the staff cheerful, obliging and polite. Food is good and reasonably priced. All in all, an impressive start.”