One of the great names of stand-up comedy is returning to Wanstead on Thursday. And it really is a return, though it’s taken 20 years for it to happen. The last time Ian Cognito was in Wanstead, he was up one of the trees, protesting against the M11. 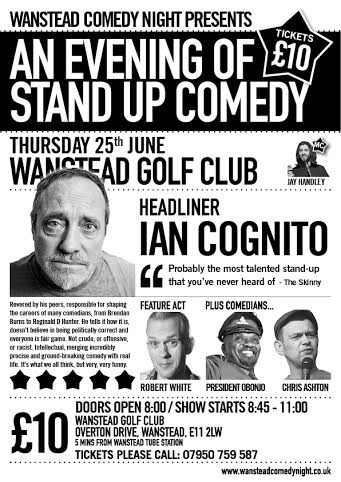 He told Wansteadium: “I had me boy with me and a bulldozer came perilously close so I scooped him up and out the way. He was about two or three and had a red duffle coat so he looked like a little Santa gonk. Bloke from The Guardian (prob Waltham Forest) took a picture and I’m told it ended up on the front page. You’d think I’d have it but I’m a shit Dad. That’s all I remember apart from being dead good looking with long hair at the time.”

Cognito is headlining the Wanstead Comedy Club on Thursday night. Jon Fentiman, the organiser, says although most people will not have heard of him, Cognito is “possibly one of the UK’s most influential comedians…. He tells it how it is, doesn’t believe in being politically correct and everyone is fair game. But this isn’t a man being crude, or offensive, or racist. This is an intellectual, merging incredibly precise and ground-breaking comedy with real life. It’s what we all think, but very, very funny.”