[picappgallerysingle id=”8642566″]Earlier this month the Mayor of London, Boris Johnson, announced a plan to significantly cut the hours of opening of ticket offices at Tube stations. With more people using Oyster cards and ticket machines, he said, there was less need to have offices open – in fact only 5% of journeys now began with someone buying a ticket from the office.

The details of proposed hours are dramatic. As the table shows, weekday opening at Wanstead will be three-and-a-quarter hours, and just an hour-and-a-half at Snaresbrook. Weekend opening is either one or two hours. 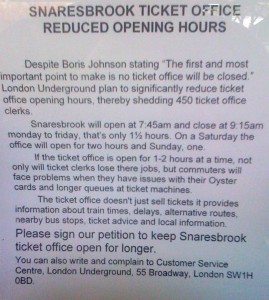 The mayor’s plan emphasises that there “will always be staff present at every station to help passengers” and that no ticket offices will close completely. And as the full list of proposed closures demonstrates, the two E11 stations are by no means alone. However passengers at Snaresbrook have been signing a petition against the closures, with opponents producing the pictured leaflet (click to enlarge).