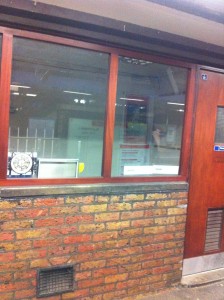 The micro-cinema and museum of Underground history which has been maintained at Snaresbrook Stationâ€™s eastbound platform has not, despite appearances, closed down.

The tiny office behind the barriers has been home for most of the past year to an evolving collection of Tube posters, memorabilia, and â€“ when the seasons allow â€“ projections of films taken from the driverâ€™s cab.Â Interest from around the webÂ has lauded the charmingly quirky presence which was the loving creation of platform staff member Malcolm Parker of Wanstead.

The office is now empty, a pale imitation of its former glory, but a new set of exhibits is on its way, Wansteadium has been assured. It’s just what might be classed a minor delay on the Central Line.

One thought on “Snaresbrook Tube cinema not dead”