Some unconnected things about Wanstead. You could almost call it a new strand. And if you send things to unconnected@wansteadium.com, it might even become a regular thing.

â€¢ Correct us if we’re wrong, but as far as we know, there is only one *proper* restaurant critic living in Wanstead. And that’s Grace Dent of ES Magazine. She likes Provender.

Provender in Wanstead is lovely. http://t.co/E4FQNUo6

Her friend Florence Vincent tweeted in response that when she booked there once and “told him my name he went full French on the pronunciation. I was very pleased with that.”

â€¢ It’s clearly a bit of a secret, but the Odeon in South Woodford is showing some live opera and ballet in the next few weeks, from the Met in New York, the Royal Opera House, the National Theatre and the Royal Ballet. Details for the first event, Rigoletto from the Met, are here. Unimpressed regular reader Gabrielle Collard says: “They’re not publicising this very well… they may as well be saying ‘meh’ into a paper bag. That’s how not bothered they are.” 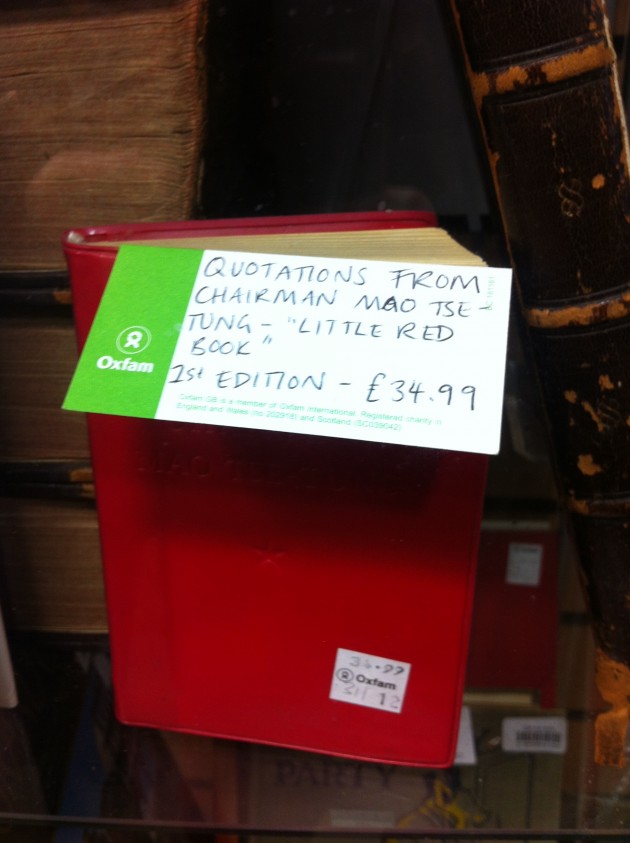 â€¢ The Oxfam bookshop (@Wanstead_Oxfam) has this beauty for sale, for any revolutionary communists out there: a first edition of Chairman Mao’s Little Red Book. (Rare unsigned copy.)

• A head of steam appears to be gathering around readers of this blog setting up a speakeasy/winebar. It’s like a Siren calling you to the rocks, isn’t it?

â€¢ And finally, Roger Godbold, who last week wrote to us saying “Shame on you, Wansteadium” (we had failed to include parts of E12 in our defintion of Wanstead) now writes to say: “WOW! I hadn’t realised that so many people would take my comments so seriously although I admit that they don’t read as light-hearted as they were intended to be.” In response to a plea for stories about Aldersbrook, he tantalisingly dangles these in front of us: “How about tea with Lonnie Donegan at his house in St. Margaret’s Road, my Dad being unable to get out of the house to go to work because of the b….. great cow blocking our front path, cycle speedway on Wanstead Flats where the gun emplacements had been ruined, etc., etc.” All sounds sufficiently unconnected to guarantee a regular spot. Roger, you’re signed.

3 Comments on "Some stuff to read. And – guess what? – it’s about Wanstead"