So we are heading towards the middle of January and resolutions are off to a good start for some. But with recent information suggesting that one in eight of us are likely to surpass our three score years and ten to that magical 100, should any of our resolutions be a healthier diet? All things in moderation methinks.

Moderation should surely then include a weekend takeaway from one of Wanstead’s finest. A recent survey by Valued Opinions, a paid surveys site, revealed that Chinese came out ahead of Indian, Italian, Thai and Greek as our favourite takeaway. Suki has never found any of the local Chinese offerings worth a return visit, though of course the Oriental Chef has its devotees (and any other reviews or recommendations would be welcome).

However, despite the findings, Suki has returned to Wanstead’s newest Indian takeaway – the Tiffin Tin – several times. Word of mouth recommendations are generally pretty favorable, and if the length of wait for delivery is indicative of their popularity then this doesn’t seem to have waned significantly since they opened their doors in July.

Wansteadium hosted several reviews in those early days, but all has gone quite since; a just-a-bit-of-fun Peter Snow-style poll of more than 100 readers found the newcomer in joint second place behind class act The Lane.

But one of the things which made them stand out was their Weekly Special offering, an ever-rotating selection of something you would not normally try. Last week’s special, for instance, was tender pieces of lamb with chickpeas, green chillis and onions in a tomatoey sauce. It was hot, all right, but had a pleasantly rounded flavour which left a slight heat.

So, The Tin, if you’re reading, how about a wee note tucked into your beautiful packaging, saying exactly what the special is. Or let Suki know and she’ll keep a list for Wansteadium readers’ reference.

Drop me a line with tasty tips to suki@wansteadium.com. 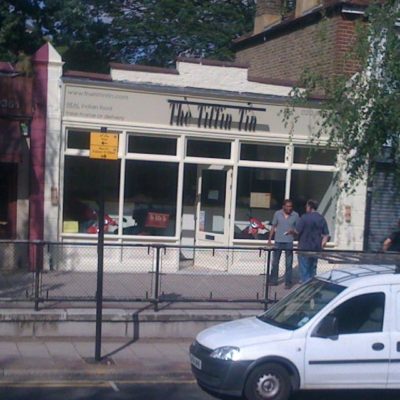 6 thoughts on “Something special in the way of dinner”