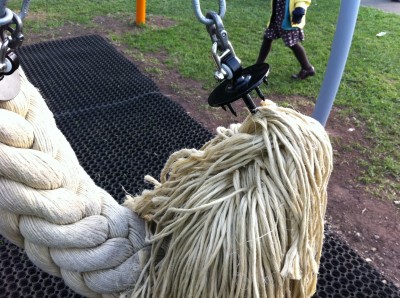 Good News: Redbridge Council is in the process of replacing the rope seat on the new playground swing in Christchurch Green.

Bad News: The rope *was* cut in two by vandals, less than 24 hours after the swing was installed on Friday. It was this that caused the spiked brackets to be revealed after they worked themselves loose. No parents complained to the council about the swing until Sunday, the council told Wansteadium, “may be because people using the equipment didnâ€™t realise the rope was not meant to be in two pieces”. As our video, taken on Saturday morning, shows, the swing of two parts – though not the original design – made for a perfectly enjoyable playground toy that children were lining up to have a go on, perhaps in part because the frayed rope looked like a horse’s mane.

The council told us:

“The equipment is designed to comply with current British Safety Standards and as the rope is 10 inches thick, it wouldnâ€™t have been easy to cut. It is also tested during the design phase to ensure that it is robust and suitable for purpose. The manufacturers have been contacted and we are in the process of replacing the rope.”

So this leaves these questions dangling: