• How to spend 300,000 on Wanstead High Street – a question exercising the minds of administrators after it became clear that the money was to be allocated from central grants. The more hardline advocates of Wanstead improvement would say that investment money needs to be matched with strict planning rules to have the desired effect. 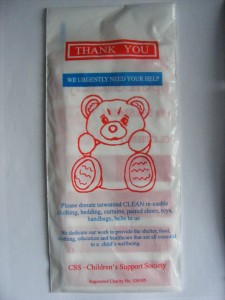 • ‘Fake’ charity clothing collection bags are being distributed in the area again. Wansteadium reader Graeme says he has received a bag from CSS, pictured, which last year Redbridge Trading Standards warned was not the registered charity it claims to be.

• The mystery over the successor to former brothel, Wanstead Sauna, continues. The new outfit in the premises bills itself a “male grooming centre”, and one Wansteadium reader told us last month that he had received a perfectly respectable sports massage there. Now reader Jack writes: “A male grooming centre that’s open at 02:30 AM on Monday 3rd January 2011??!!” Curiouser and curiouser.