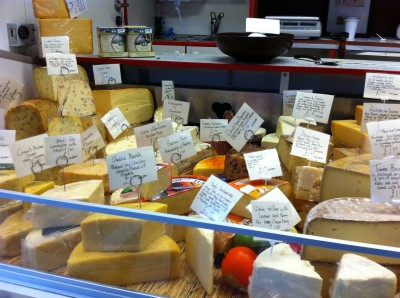 The name ‘farmer’s market’ covers a pretty wide variety of ventures, from the earthy and truly local, through designer and oh-so-trendy, to the travelling street market with not very much to do with farms. Wanstead’s, which is held again this Sunday, thankfully has enough of the authentic about it to make it worth returning to.

For anyone who’s not a regular, I suppose I should say that there are usually about 20 stalls with a mix of fresh produce. You would find something for most sittings – pastries and cakes or bread from Le Moulin; eggs, sausages, game and venison, pies and fish; vegan and vegetarian offerings from The Parsnipship; Kent apple juice and pickles and preserves. It’s the full plough to plate experience.

There’s also a couple of non-food stalls selling jewellery, old photos, a nik-naks (not the scampi-flavoured vile crisps from the 80s). One stall sells bacon butties made to order, though last time I looked interest seemed limited – most passing trade went to the warm indoors of Caesars a few yards away. Perhaps they need to rethink their offer – maybe a roasting pig or large leg of lamb sliced and smothered in some of the pickles from the stall next door all wrapped up in a crusty roll would see more interest. 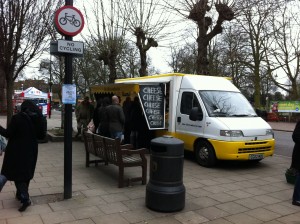 Near the end of the line is the unusual-looking vehicle known as the Cheesewheeler – odd enough, in fact, to make it possible to imagine it trailing from one charming deserted French village to another, keeping les baguettes of vieux hommes on banquettes stocked with slimey smelly fromages. The side of the van flips up and hey presto more than 100 different kinds of cheese – British regional and overseas varieties – are on offer. In some ways the presence of Cheesewheeler, or a stall like it, is a measure of the authenticity of a farmer’s market. As the BBC’s Mark Easton wrote a few months ago, the past 20 years have seen an amazing resurgence in the art of cheese-making in the UK as farmers respond to changing times.

“[W]hen the price of milk plummeted in the 1990s, the resilience and imagination of Britain’s dairy farmers was tested,” he wrote. “They desperately needed new products to survive. Perhaps they opened the old trunk at the back of the barn and found great-great grand-mother’s recipe. Or maybe they experimented with cheese-cloth and press on the kitchen table.”

Now a country which ate four kilos of cheese per head in the 60s is eating more than 12, and the presence of specialists as well as growing supermarket awareness has all helped. 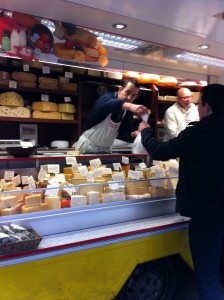 The cheese on offer at our farmer’s market is not all British, of course, and I hope in future months to explore this a bit more. Any recommendations from fellow Wanstead folk are welcome. I’m interested in this business of cheese, but to be honest it’s not my chosen specialised subject. I’m not a cheese bore, you might say. But I decided to conduct something of a practical challenge, and I chose Brie de Meaux – one of the names common to delis as well as supermarket shelves – as the guinea pig for my taste test. How would the Cheesewheeler brie fare against a seemingly identical sample brought from Wanstead’s favourite, the Larder? I didn’t really expect there to be much difference, but my dinner guests two weeks ago were in no doubt. The Larder’s version was decent enough; it held its form and didn’t offend. But the van’s version was pungent, runny in the middle and almost al dente on the outside; it felt like it was oozing to get on to a biscuit. Visitors to my fridge hadn’t appreciated it, but visitors to the table did.

These guys have obviously got a passion – they must have to drive around in a van which is, frankly, unlikely to be pleasantly smelling. They’re approachable enough. If their web address – Cheesewheeler.com – pointed to something other than a 404, I’d be even happier with them.