Redbridge Council has told Wansteadium that it is giving a temporary reprieve to the horse chestnut trees on St Mary’s Avenue which have been earmarked for the axe. Wansteadium highlighted this issue last week.

A statement from the council reads:

We understand residents are concerned about the planned felling of 11 trees in St Maryâ€™s Avenue and due to the high level of interest we have put this work on hold. Discussions will be held with local ward members to explain the reasons for removal in more detail and a replanting proposal. However, the trees will still need to be removed to ensure the safety of local residents and road users as they are on a busy main road. This is due to internal decay identified following an inspection by one of the Councilâ€™s Arboricultural officers. If any local residents have any further concerns we would be happy to discuss this further. Please email trees@redbridge.gov.uk

Resident Pete Daly, who has started a campaign to save the trees, is going to watch matters closely, and in particular is wanting to know if the plan would be to replant with new or mature trees. Councillors are due to discuss the replanting plan this month. 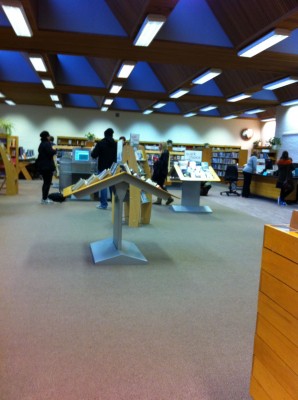 The renovations at Wanstead Library are now complete, and readers have had their first week to see what they think. The initial impression on entering is that there’s much more space, because the central issuing and returns desk has been removed.

In its place is a smaller desk off to the side, and two silver self-service ‘borrowing machines’. They are not unlike the kinds of self-service tills you get in Tesco’s or Boots, but sleeker and simpler to use.

The process is easy – octogenarian acquaintances of Wansteadium have demonstrated they are not necessarily a bar – though really technophobic sorts will probably not get as far as finding out that there’s nothing to be scared of.

There are only three steps – put your library card under the red beam; then place your books in a pile on the shelf, then take your ‘receipt’ which tells you when they are due.

Being at all impressed that the machine knows exactly which books are on its shelf without them having to be scanned individually is probably pretty lame (a bit like Douglas Adams on humans thinking digital watches are “pretty neat”) but it is impressive.

In fact the explanation of the technology from one of the men who supplied it sounds so convoluted, it’s perhaps a miracle they made it as simple as it is:
(eg “RFID is a broad term for technologies that use radio waves to automatically identify people or objects – the use of which reduces the amount of time required to perform circulation operations.” – quoted in February’s Wanstead Village Directory.)

And there’s at least one dissenting voice on the overall renovations from Barry Tighe of Ilford, whose letter in this week’s Wanstead Guardian accuses Redbridge Council of having “vandalised” the library. He says:

In general, Wansteadium reckons the changes will amount to two minor cultural ones, and one larger social one.

Cultural #1: It’s farewell to that traditional slight feeling of passport control that comes from having to check in and check out at the desk
Cultural #2: It’s also farewell to bits of gummed paper in the front of books with dates stamped on them, a small but ubiquitous experience for generations of readers.
Social #1: Most importantly of all, it’s farewell too to the library being closed on Wednesdays. In these austerity days, when many libraries are closing altogether, that’s worth celebrating. Wanstead Library, now open six days a week, for marauding infants and others. 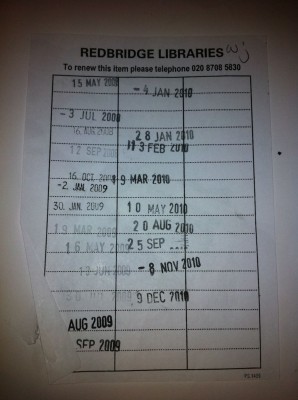 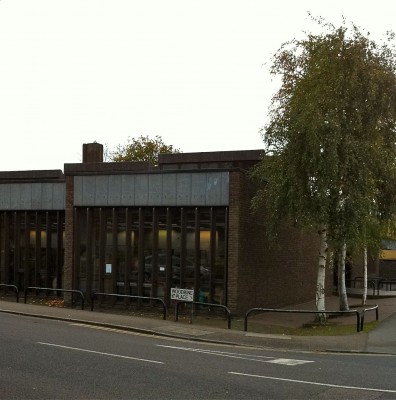 Redbridge Council has announced that Wanstead Library is to shut for six weeks after Christmas to allow the installation of self-service checkouts. These will allow books to be taken out, renewed, returned, and for fines to be paid, thus at a stroke avoiding the terrifying risk of a librarian’s raised eyebrow at a badly-overdue book. At Gant’s Hill library, where these checkouts have already been introduced, apparently 80% of people (or “customers”, as Redbridge calls them) use the machines.

A promised gain which may well offset any resistance to the machines – the council promises the library will be able to open an extra day each week, meaning an end to the rather quaint “Closed Wednesday” tradition.

There is, however, one fly in the ointment. In its statement announcing the temporary closure, the council says:

We apologise to customers for the disruption caused and hope they will continue to use other libraries, or renew their items online during this time.

This appears to mean that books taken out before the closure will have the standard three-week loan period, and that they will have to be renewed online or at another branch in the meantime. This could be bad news for the technophobic, Wanstead-bound, offline or plain disorganised, who – it appears – will be lumped with a Â£4.20 fine (20p x 21 days) when the library eventually reopens. At least they won’t have to contend with any eyebrows when paying it.