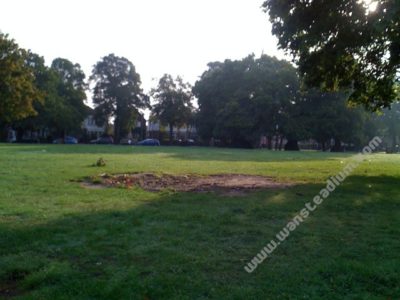 The remains of a chestnut tree on Wanstead Green – celebrated as a ‘tree with a postcode’ when it was the centre of the protest against the building of the M11 link road in the early 1990s – has been removed, Wansteadium can report.

The 300-year-old tree was pulled down during the building work, and the fallen trunk has been lying on Wanstead Green since 1993, gradually rotting. Conservationists warned in early 2009 that the trunk would be lost unless someone took over caring for it.

The tree became a symbol of the protest against the road, and even became the subject of legal argument over whether it constituted a dwelling, since it had protesters living in it who received letters there. Despite its nickname it is not thought that it ever did actually have its own postcode.

More history on the tree here.

UPDATE 1200 BST: The Wanstead Guardian has now followed up on this story.

UPDATE 1730 BST: Wanstead Guardian now reporting that the City of London Corporation has taken the stump into protective ‘care’. A spokesman told the paper:

“This much loved tree has been deteriorating rapidly so we took it into protective care on Monday. I’m sorry we did not tell more people but the tree is safely in store with us while we preserve the wood. We’ll definitely let local residents know through the press once we have found a solution and can bring it back, after treatment.”

Earlier, Wanstead Society stalwart Jack Figg had raised the prospect that someone might have taken the wood to use it. Legally minded Wansteadium readers are invited to discuss what legal recourse there might have been against anyone who had taken it, bearing in mind it was a rotting tree trunk, seemingly abandoned, with no indication that it was there as an unofficial monument. 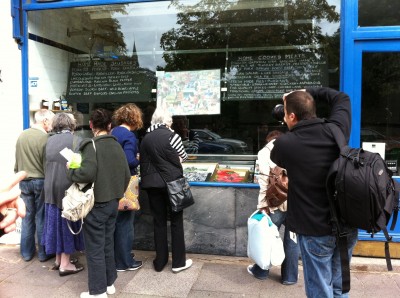 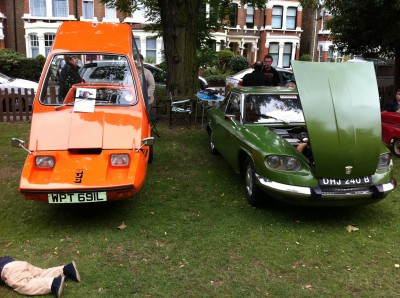 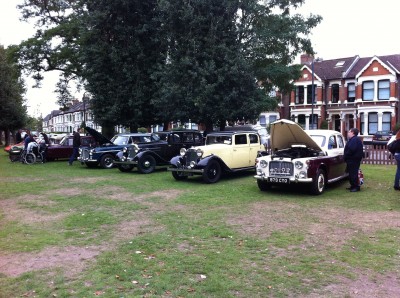 Send your photos to add here – by e-mail to wansteadium[at]gmail.com or tag them “wansteadium” on Flickr.

The mystery of Wanstead’s random flag appearances has returned, with a St George’s Cross appearing atop a tree on the Green, Wanstead. First spotted by Wanstead tweeter @Gradiate, who posted the following picture and comment: 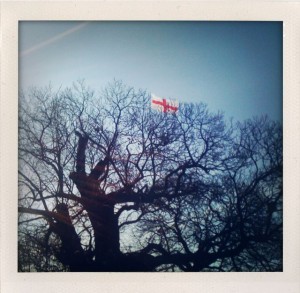 Someone has placed a St Georges cross up an ancient tree near my house – looks beautiful in the sun.

Also later reported by the Wanstead Guardian, here, which adds the back story of the spate of mystery flags on Wanstead golf course last year.