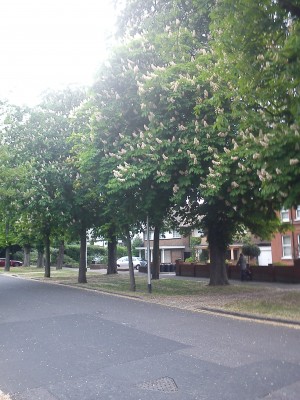 Trouble is brewing in St Mary’s Avenue where notices have been attached to some of the distinctive horse chestnut trees announcing that 11 of them are to be chopped down. 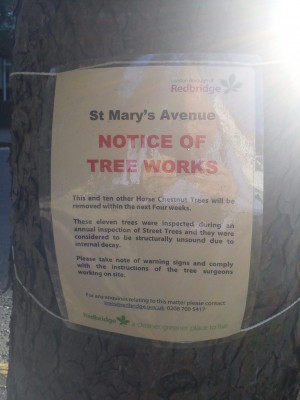 Wansteadium reader Pete Daly is launching a campaign against the felling, and has written to Redbridge council demanding a moratorium while further consultation takes place. The notices warn, however, that the cutting could take place at any time in the next four weeks, and is due to the trees being “structurally unsound due to internal decay”.

Pete Daly plans to drum up support among fellow residents and has written the following e-mail to the council:

I would like to express my extreme concern about the proposed barbarity of cutting down 11 of the magnificent Horse Chestnut trees in St Maryâ€™s Avenue in Wanstead. Removing this number of trees will destroy the natural beauty of this road for many generations. This must not go ahead without public consultation

I appreciate, of course, the danger to the public of falling branches or indeed trees but these trees are far from dead and in reality represent no threat to the public. Being partially hollow is a natural state for a tree and a high percentage of the trees in the UK would have to be felled if the same principal that you are applying were to be applied Nationwide

I would like to request a moratorium on this work until 3 things can take place
1. Public consultation of at least the residents of St Maryâ€™s avenue
2. A second opinion from an independent arborologist is sought
3. Investigations into the possibility of purchasing an insurance policy that would indemnify the council from all losses arising from falling branches / trees on St Maryâ€™s Avenue

I am sure that the residents of St Maryâ€™s will be more than happy to meet any costs incurred in these three options to protect the beauty of their road. In the past I have been advised by the council that I cannot cut down trees in my garden as they are legally protected in some way. Surely the same legal protection must cover these magnificent specimens?

Wansteadium has contacted the council for comment and to ask what its attitude to Pete Daly’s requests would be.

Earlier this year, we reported that within Snaresbrook and Wanstead wards, 104 trees were cut down after the 2010 annual survey found theym dead, vandalised or structurally unsound. Those trees were then replaced. That work, however was due to have been completed by the end of March, so the St Mary’s Avenue felling appears to be in addition to that.

3 Comments on "The axeman cometh to St Mary’s Avenue, Wanstead"