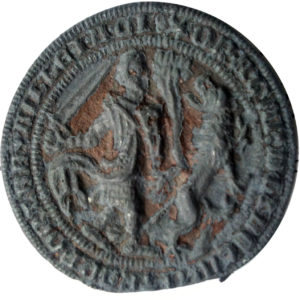 Wansteadium reader Ruth Nation of Ingatestone Road found this object in her garden a few years ago. The question is… what is it?

She writes: “The mystery is, I suppose, that over the past 9 years or so I have shown it to virtually every visitor to my house and no-one has seen anything like it before. I knew it couldn’t be a coin as it is one-sided and it seemed too large and archaic looking to be a military medal.

“The second mystery is that I have spent countless hours online and in various museums and have not seen anything like it. The closest to it is a ‘pilgrim’s token’.

“It also seems to be mysteriously changing colour and the image that was very hard to make out is now very clear so I don’t what metal it could be made of.

“The last, tongue in cheek and most fun mystery is that no matter how many times I blow the image of it up, look at it with a magnifying glass or take rubbings I can’t make out the writing – it seems that my mysterious find is keeping hold of its secrets!”

So, people of Wanstead, here is the challenge. What is this mysterious item? What is the picture of? What does the writing say? And above all how might it have ended up in a Wanstead back garden? Suggestions welcome below… 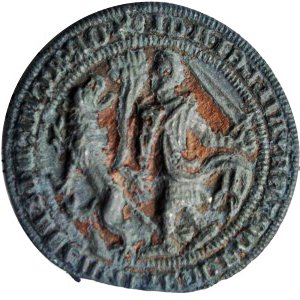 Update: Carole Edrich writes:
I think it’s some kind of imprint or mould. Flip the image of the coin as I have in the one attached and some letters are legible. There’s an ‘-io’, possibly a ‘K’, then maybe an ‘in’ then something like ‘-iffe’ or ‘-effe’ so maybe ‘deffend’ Anyway, I’ve attached the image flipped and upped the contrast a bit so that it can be shared.

Frances Simmons of the Simmons Gallery of Art Numismatics and Metrology based in Leytonstone writes:

Following a prompt from a Wansteadium reader, we had a look at this and reckon it’s a 17th century brass badge (something you’d wear to show loyalty or fealty) although it could be earlier. Yes, it does look like St George and the dragon but where’s his horse? More like a knight slaying a lion. Lots of stuff like this and earlier has been dug up around the Thames. We’d recommend that even though it’s just base metal, you report it, as part of the Portable Antiquities Scheme to:
Katherine Creed, Finds Liaison Officer – London
Department of Archaeological Collections and Archive
Museum of London
150 London Wall
EC2Y 5HN
Work T: +44 (0) 20 7814 5733
The Museum of London has a tremendous collection and it would be easier to read the inscription from the real item rather than a photo. Probably oxidisation has occurred now the item is out of the ground (clay preserves things nicely) which is why it’s so difficult to read and is changing colour. I’m sure the Museum will be able to help out a bit more. Very interesting! It’s amazing what turns up.

6 Comments on "The Wanstead garden mystery"