Ron, 90, has been cultivating his Wanstead garden for more than 50 years, and now he enjoys abundant fruit and veg, shows of flowering colour spread across the months, and an understanding of the gardening year that only comes from having observed thingsÂ  for decades. In a new feature for Wansteadium, Ron will be recording his weekly tasks, remembering the jobs that need to be done, and adding a few ideas along the way.

“We’ve had such a mix of weather, one of the things I’ve been making sure to do this week has been because of it being so dry – and one of the others has been because it’s been so wet. But it’s true – it’s been dry enough to mean that I have had to make sure to keep my runner beans well watered this week. I’ve been having a good crop for the past few weeks, but there are still beans growing, and so it’s especially important to keep them wet now to allow them to keep cropping. 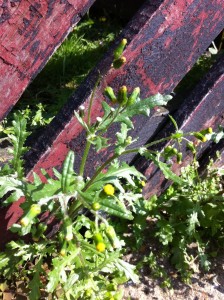 On the down side, the rain we’ve had has meant this is great time for weeding. You’ve just got to keep them under control when they are growing as quickly as they have been. Weeds like groundsel (in my picture) need close attention – they’ve got so many seeds that you really need to be careful. Don’t put them anywhere near your compost – you’ll just be propagating them. I put them in my green bag and let the council have the benefit of them.

I have just started getting the first outdoor ripe tomatoes – making sure to keep feeding the plants with Tomorite. I’ve been growing cherry tomatoes this year – Gardener’s Delight – they’re sweet little things. I’ve had a few already but soon I’ll have so many I won’t know what to do with them. I had such a crop of plums this year – they’re all finished now – that I didn’t really know what to do with them. Each morning when I went out, though, I’d find a little heap of stones, cleaned up perfectly. It was the pigeons who ate my gooseberries a few weeks ago, but these stones were so clean I can only think that the fox had been eating them. At least they’re eating healthily, I suppose.”

Â You can put your questions to Ron via wansteadium@gmail.com

One thought on “Tips for Wanstead gardeners”