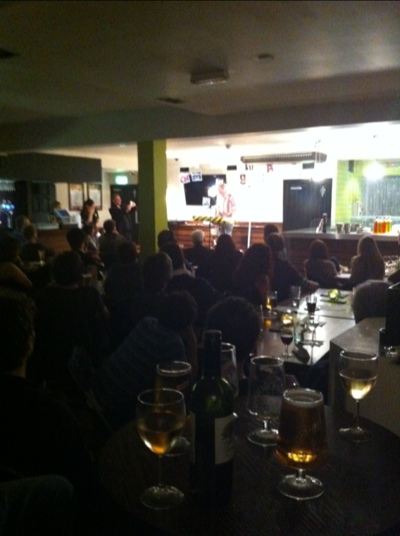 Wansteadium invited anyone who went to Thursday night’s Wanstead Comedy Night at Bar Room Bar to submit their nominations for best lines of the evening.

I was a bit the worse for wear and the scribbles I wrote on a piece of paper I had in my pocket don’t make quite as much sense this morning, but some odd phrases which stood out include “how come there’s no such thing as chaps with flaps”; “We’ve got Jehovah’s Bystanders in Peckham because no one witnesses anything in Peckham”; “My tip for a happy marriage, lads? Tools – options – delete history.” Also a line from Robert White about how he came from a musical household – he lived in A Flat. And every time he moved he had to change key. At one stage (for a reason I can’t quite remember) he put a plastic poo on his head and said something about that when it came to criticism he was undeterred. This all makes me think being a comedy critic must be very hard – you need to drink to find it funny but the drinking means you can’t remember it. Well, I tried.”

You did Clive, and for that you will get a build-your-own model of Andrews Builders Merchants. Any further suggestions are welcome at wansteadium@gmail.com