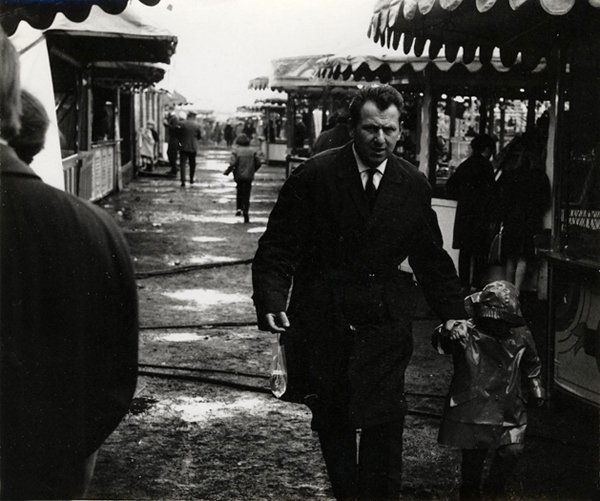 Vivid photos and memories apparently of Wanstead Fair in the 60s have turned up in a box in an antique sale, and now have ended up online. The My Found Photos blog, run by @Bruce_M_W, features discarded but interesting pictures and tries to discover as much of a story behind them as possible.

After posting several atmospheric shots from an unknown fairground, which Bruce found in a sale in Hitchin, he found some pages of writing among them. They seemed to indicate that the picture were of Wanstead Fair. The writing is jaded, alienated, and clearly of its time – which appears to be the 1960s. One part reads:

Half a dozen assorted cretins spin the cars to the delight of the sex starved girls riding within. The spinner, who collect the fares from the coloured cars and place the money in the corresponding coloured circles in the cash desk (a simple check to stop the spinners stealing), have various dated states of hair, earrings, scattered tattoos, waistcoats or leather studded jackets or just shirts, ill fitting trousers, jeans, crushers, sneakers, winkles, battered hands, bad eyes, heavy smoking and beer drinking regularly. They are paid very little but short change the clientele and place small blocks of wood under the car seats to allow the dropping money to fall to the bottom of the car, to be collected at the end of the day, 18/- a car, 12 cars in all. That money plus numerous combs, buttons, pens, rings, knives, lipsticks, house keys and dirt congregate in the cars and slip to the ground under the waltzer.

The article in full, along with the photos, can be seen at My Found Photos. Bruce writes: “When reading it, he comes across as a bit angry, but itâ€™s important to remember when it was written. I share many of the memories of fairgrounds that are written here, but it is clear how times have changed. I wonder why he kept only this piece of writing in the box and no others. Itâ€™s all a bit of a mystery, but a really interesting one at that.”

If by some miracle you can identify photos, writing or even the handwriting, it would be some miracle.

One thought on “Wanstead Fair memories from a box”