A few years ago, at a restaurant in Rye, for pudding we were tempted by something on the menu called Whim Wham. It put us in mind of Boris Johnson’s favoured name for table tennis (“whiff-whaff”) – something quirky yet charming from time gone by. And that’s in fact what it was – a mix of cream, alcohol, some fruit – much favoured, I seem to recall, by the Elizabethans.

And yet it wasn’t really up to much. It was clear to us all that this proto-trifle would have been much more enjoyable if it had been just a bit more like actual trifle.

I was reminded of this at last month’s farmer’s market in Wanstead High Street. The thing which caught Mr Orange’s eye was on a stall run by a Buckinghamshire pie company, Raven’s Den. It had the quirky, charming name of Fidget Pie. We’d not come across it before, so I indulged his curiosity. The lady at the stall enthused about it, telling me the firm’s pies were hand-made using local ingredients – nothing reformed used in any pies – and I felt a bit reassured. Seemed a simple enough filling – ham, cheddar cheese, apple, onion.

We took it home and although she told me we could eat it cold or hot I couldn’t really imagine cutting into a cold pie – too Melton Mowbray for me I’m afraid. So we heated it for the allotted time and ate with a simple green salad. 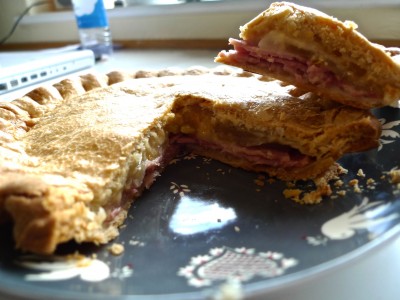 I’m afraid from the outset for me it was too salty, though the children ate it comfortably – probably because of being starved of salty things in their diets. The pastry was as it should be, ham was sliced (and looked reformed, to be honest), onions plentiful though perhaps too many for a small pie. There was no discernible taste of cheese and the thinly sliced apple added a hint of a cidery flavour.

Summed up in a word – unremarkable. It was simple fare which came from a simple Midlands recipe – apparently popular with harvesters in the 1950s according to The National Trust Recipe Book. So, unremarkable like a lot of those older recipes which have fallen out of use – just like Whim Wham – but for Â£6 it is not something I will be seeking out again at Sunday’s Farmer’s Market. It won’t stop me going though.