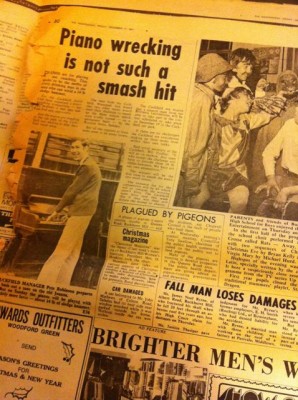 While having building work at his Nightingale Estate home, Wansteadium reader Matt Boltwood became the unexpected owner of a clutch of kind-of-old Wanstead newspapers. He generously donated one – a copy of the Express and Independent (incorporating the Woodford and Chigwell Times) to Wansteadium for dissection.

In the first of three posts, here’s a taste of the Wanstead news from December 1971. (Coming soon – Wanstead adverts and Wanstead property.)

Headline: GRAZED KNEE
Story: A 55-year-old woman was the only casualty in a three-way car crash at the junction of Spratt Hall Road and New Wanstead last Wednesday. Mrs Gladys Boycott, of Brook Rise, Chigwell, suffered a grazed knee but declines medical aid.

Headline: TIME TO END LAND SPECULATION
Story: Speculation which blocks the use of much-needed land was attacked this week by Wanstead and Woodford Communists.

Headline: ORDER TO PRESERVE TREES
Story: A tree-preservation order is to be made on trees in New Wanstead…. In [his] report to the [Redbridge Planning and Development Committee], [Mr E H Smith, borough planning and development officer] stated: “There are many trees in New Wanstead and an important piece of forest woodland at the junction with Wanstead High Street. The character of the area is bound to change as the large Victorian and Edwardian houses become ripe for redevelopment.”

Headline: ‘Spirit’ helps her writing
Story: At the age of nearly 80, a Wanstead woman has just completed a collection of children’s fantasy stories. What is more, Miss May Phillips of Spratt Hall Road claims they have all been written with guidance from the spiritual world. “A voice within me told me quite clearly to begin writing,” she recalled. “Sometime my pen would not move fast enough as the ideas were put into my head.” The urge to write began in the summer of 1970 as she was resting in her garden. The stories, with such titles as The Ballerina Bird and The Giant Geranium took Miss Phillips only a few months to write. Now she is anxiously seeking a publisher.

Headline: Confusion among the cabbages
Story: It was business as usual this week at two flourishing local greengrocers – Mr Tom Ribbans’ shop in High Street, Wanstead, and Mr Robert Dudley’s premises in Nightingale Lane – despite a bit of confusion among the carrots and the cabbages. The confusion arose from a report in last week’s issue about the long local history of the Gilbert family with the greengrocery trae – and the fact that, at one time the Gilberts owned both the shops. Both have now passed out of the family – and neither has any intention of closing down.

Headline: Piano wrecking is not such as smash hit
Story: Pianos are for playing, not smashing. That seems to be motto of every drinking man in the area who can wield a 14lb sledge hammer. For the Cuckfield Social Club have organised a piano-smashing competition – but the problem is that they cannot find any opponents. And the pianos are standing in the car park of the Cuckfield just waiting to playing their final swansong.

Letter – headline: Belched
Text: Sir, A large yellow telephone and Post Office van drew away from the traffic lights at Wanstead station. As I watched, it belched out a cloud of black smoke which almost obscured the bright red coat of someone walking alongside… If I had personally directed a cloud of foul black gas at the driver or owner of that van, he would have had something to say. Is there nothing at all that the individual can do nowadays, or will he always to put up with filthy exhausts? Yours faithfully (Mrs) M. G. Pitt, Chairman, Wanstead and Woodford Branch of the Conservation Society.