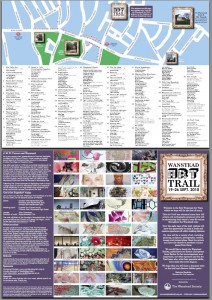 • The full list of artists participating in the Wanstead Art Trail – a fantastically enlightened bid to give Wanstead artistic buzz (rather like the regeneration-inducing Folkestone Triennial) – has been published by the Wanstead Society. It shows 63 venues in Wanstead which will be showing works by more than 130 artists, both professional and amateur. It will take place between 19 and 26 September and more details, including the full map, can be found at the Wanstead Society website.

• Rumours that the Metropolitan Police had started marking out the part of Wanstead Flats where they want to site their Olympic operational headquarters were scotched when it turned out the lines had been painted by the Showman’s Guild for the Wanstead Flats Fair. Opposition to the Met’s proposal is increasing in volume; the force is making its case online.

• Meanwhile, on Tuesday night, the decision will be made about the Arcelor Orbit sculpture, which, in June, Wansteadium revealed risks interfering with the Freeview TV signals of people living in Snaresbrook.Details here. It now appears that if there did turn out to be a significant effect, the Olympic Delivery Authority would be required to pay for corrective measures, though it’s not clear what this could be.