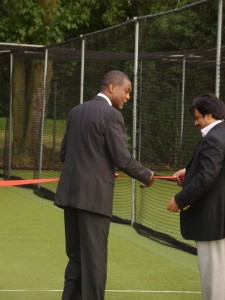 • A spectacular traffic snarl-up which stretched from the M11 to Wanstead High Street last Monday meant that legendary West Indian fast bowler Courtney Walsh didn’t make it to Wanstead Cricket Club in time to open new training nets as planned. But all was not lost – fellow legendary West Indian fast bowler Michael Holding was there and stood in for Walsh. (Photo: Dave Buba)

• The application to knock down the 160-year-old building which once housed Wanstead’s only ever cinema, Kinema – now Nam Pham, next to the George, has been rejected again. The plan was for a block of flats.

• A public inquiry into the proposal to develop the former Chepstow House in Leicester Road, Wanstead, has now finished. Report here from the Counties’ Residents’ Association, who oppposed the plan. Decision expected by the end of the month.

• Two council pest control officers denied charges that they deliberately poisoned animals at Alexandra Lake in March. More than 80 birds and a dog died at the lake.

• It appears that Wanstead Sauna is now no longer open for business, with a very large padlock having been put on the door.