â€¢ Plans for a homeless hostel on Cambridge Park were approved by the Redbridge Planning Committee. More than 150 Wanstead residents had opposed the plan. Voting on the committee was split, but the plan went through on the chair’s casting vote. Opponent Mick Goodenough told Wansteadium legal advice indicated a judicial review of the decision was unlikely to succeed.
â€¢ Litter bins on Christchurch Green are too small for the amount of litter, the Wanstead Society has told Redbridge Council. That, or foxes, or something else, Â might be the reason for the regular sight of overflowing litter, though tweeter Paddy Fantastic (below) has other thoughts. The council says it will replace the bins, when the current ones wear out. 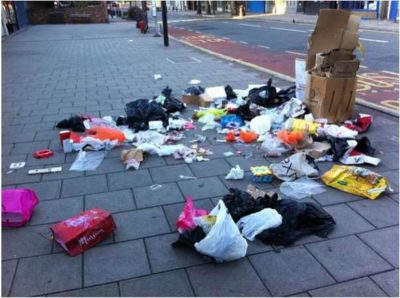 â€¢ Welcome to the Larder Mark III. After opening a new branch in Bethnal Green, Wanstead’s favourite is also taking over the Butlers’ Retreat tea rooms in Chingford Plain. The Larder is turning into a Wanstead success story.
â€¢ Speaking of which, Little Bears nursery on The Green has announced a pretty big expansion. From having places for 35 children, it is growing by adding a further 90 places, and is creating 20 new jobs.
â€¢ They are not the only things growing. The ArcelorMittal Orbit (also known as that weird red sculpture next to the Olympic stadium) is now about a third of the way through its construction. When it reaches its full height, it will disrupt the Freeview signal to houses on Hermon Hill.
â€¢ Wanstead is gearing up for the second Wanstead Art Trail, which runs from 11 September. The event’s new website is taking shape too; it’s here.
â€¢ Where Wansteadium goes today, the Sunday Times will go tomorrow. After our efforts to prove – despite apparent odds – that hedgehogs still roamed through Wanstead gardens, the paper reported this week that:

Hedgehogs could be wiped out in Britain within 15 years, a study has warned. They are on a list of the 10 indigenous species suffering the biggest decline in numbers in recent decades, along with the cuckoo, left, turtle dove, brown hare and Scottish wildcat. According to the Eden Species Report, which measures native speciesâ€™ populations and rates of decline, there are about 1m hedgehogs left in the UK â€” a decline of about 25% over the past 10 years. In some parts of Britain the fall could be as high as 50%. With populations becoming more isolated as a result of the decrease in numbers, naturalists fear that the species will struggle to maintain a sufficiently large gene pool to sustain a healthy and viable population.

â€¢ There’s a full calendar of events in Wanstead here. You can submit your events at events@wansteadium.com
â€¢ Wansteadium’s fledgling free classifieds advert service, which allows you to sell your unwanted items to other Wanstead residents, can be found here.