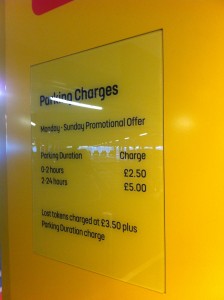 â€¢ Police are investigating how a 44-year-old man was stabbed on Wanstead High St at 5am on Tuesday. The area was taped off for much of the day. More details at the Wanstead Guardian, which says police believe it was a domestic incident

â€¢ A For Sale sign now adorns the premises previously occupied by Santa Fe. And Cambridge Park accountants Tish, Press and Co say they are leaving Wanstead simply because of the difficulty of parking.

â€¢ BUT here’s a bit of good news for embattled Wanstead shopkeepers: Westfield NOW NO LONGER OFFERS FREE PARKING (see pic). Up to two hours will now set you back Â£2.50.

â€¢ Nudists took over Wanstead’s cricket ground last weekend for (authorised) naturist camping, in spite of the chilly conditions. Meanwhile the club is gearing up for the start of a new season, with the first games next weekend. Last year, you may remember, Wanstead and Snaresbrook were national club finalists, and they will be hoping to repeat their successes. From next week, Wansteadium will be bringing you regular reports of what’s going on, hopefully at all levels of the club.

â€¢ No news yet on whether Costa will, as rumoured, open in the former Enigma premises, though it appears George Lane is to get one. 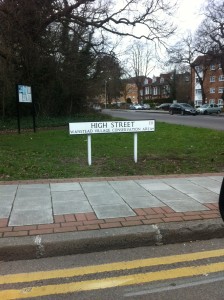 â€¢ Is it Wansteadium’s imagination, or are the ‘conservation’ zone signs at the Snaresbrook end of the High Street new?

â€¢ Reviews are welcome for the newest (and some would say bravest) culinary venture: a seafood stall next door to Queen’s British Steak House and Grill, called Wanstead Shell Shack. The best of luck to them (though is a PTSD-based pun really good taste?)

â€¢ For the avoidance of confusion, and partly because we’ve never thought to say this before, but Wansteadium has no link whatever with the Wanstead Village Directory. That is all.