â€¢ Councillors have admitted they are unable to do anything about the black plastic sheeting which is attached to the fence around the Evergreen Field. But at Monday’s Area 1 committee (which went unreported by our local newspapers – only one local blog covered the event), Cllr Chris Cummins told residents he would be asking council officers to insist the land is tidied up. He also said that claims that contaminated oil had been dumped on the land would be investigated.

â€¢ The inquest into the death of Wanstead actor Paul Bhattarcharjee, which was held on Friday and which recorded a verdict of suicide, is reported here.

â€¢ There will be a foodie fundraising event for the Philippines just after Christmas at the Christ Church Hall. Details will follow.

â€¢ Times restaurant critic Giles Coren published his list of 50 restaurants at which he would happily spend his own money. The Tiffin Tin in West Hampstead came in at 16th, and so was a great boon for Wanstead’s branch. If only there was a modern, large restaurant near the takeaway which was vacant and into which it could expand. If only. 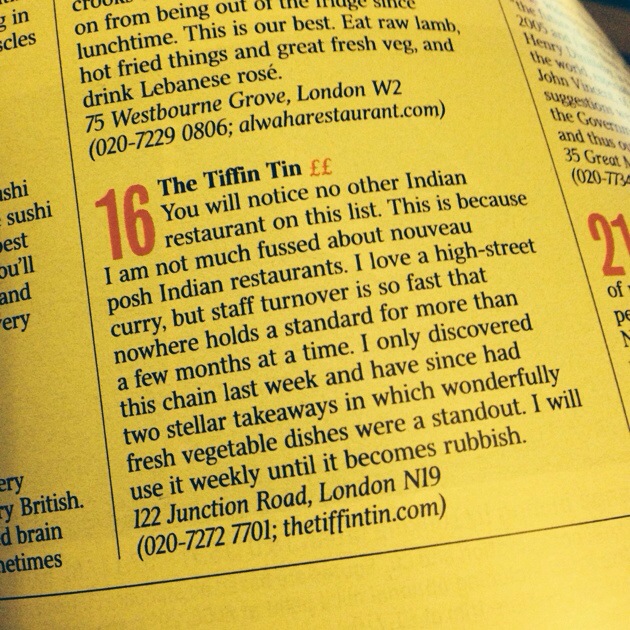 â€¢ The Wanstead Magazine Club, which was restocked last weekend with a lush collection of National Geographics, Monocles, Which and others, was nearly completely cleared out by grateful readers. More stocks arrived at the Larder on Saturday, and the service is to be extended to Angel’s Hair and Nails which has moved into Judith’s former annexe. Anyone wishing to join this philanthropic rehoming of unloved but excellent magazines, please get in touch.