• The first Wanstead Village Show is taking place today, Saturday, at Christ Church. Do go along and support an excellent venture if you can – any photographs you take will be welcome at photos@wansteadium.com

• The parakeets which have become a familiar sound over Wanstead this summer aren’t – perhaps – just the charming addition one might think. Reports suggest they may have attacked tawny owls in Wanstead Park – the Corporation of London says it is going to monitor their numbers.

• Strange goings on in St Mary’s Avenue. The council is proposing to cut down old horse chestnut trees which have, it says, become dangerous. Long-time readers of Wansteadium might remember this issue from last year. But earlier this week, a story in the Wanstead Guardian earlier this week somewhat underplayed some feelings on the issue, with the unusual headline “Neighbours on St Mary’s Avenue are understanding of Redbridge council’s decision to chop down trees”. Wanstead celebrity lawyer Mark Stephens objected on Twitter, saying:

I haven't been consulted about this and am distinctly unhappy http://t.co/oGarOtaC @Wansteadium

Before long the story disappeared from the paper’s site and was replaced with one saying: “FURIOUS homeowners fear a “beautiful” picturesque avenue will be ruined when dozens of mature trees are felled for health and safety reasons.” All very odd.

• Wanstead Art Trail is in full magnificent swing – again, photos are welcome. See the art while you can.

• A casual tweet by Wansteadium follower @cdukester13 about a 1940s photo of schoolgirls at what was then the Royal Wanstead School (but is now Snaresbrook Crown Court) apparently doing Usain Bolt’s pose and the Mobot ended up in the national papers. Nice tweeting. 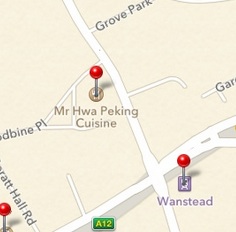 • Re the row over Apple’s new iPhone maps: they have revived a long-closed Wanstead restaurant. Nostalgic early adopters beware.