I hear that plans for redeveloping the former Wanstead cinema site which adjoins the George pub are again being readied. Once home to a 600-seat picture house, the upper floors of the current building have gradually lost their grandeur as they have been allowed to lie unused and baleful. The proposed project outline can be viewed here. Earlier incarnations of the plan were, ahem, snookered by campaigners from the Wanstead Society – and I anticipate a hotly-contested rematch might be in the frame. I’m not a professional aesthete, but the plans don’t look particularly attractive to me (not that what’s there at the moment will have tourists flocking). There are pics of the old cinema, which was rather charmingly known as the Kinema, on Flickr here. If nothing else, someone ought to reclaim the name Kinema for Wanstead.

• Morgan and Randall (deceased)? Passing the bare Onedeko boutique this fine day, I was similarly struggling to locate erstwhile realtors Morgan Randall at their habitual premises. Was it, I wondered, just a refit of their office or could Wanstead really be down to the bare bones of half-a-dozen estate agents on the High Street? Should one be preserved ahead of time for posterity, at the hands of a first class taxidermist? It’s a mystery – but someone did answer the phone when I rang.

• My favourite subject in life is, of course, the Wanstead property bubble. As we all know, it’s not really a bubble at all. It’s just pure sustainable value based on quality of life and impressive transport links. But I was very impressed to see how quickly a For Sale sign in the everso desirable Grove Park changed into a Sold – I reckon it was just three or four days – and with an asking price of just under a million Huckleberry Hounds, I reckon that means the good times haven’t left us. 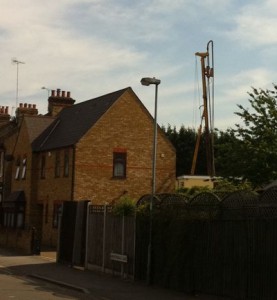 • While I was in that neck of the woods, I spotted this rather impressive looking tool at work. Though my photo doesn’t do it justice, it was an incredibly long drill. Really long. I suppose I could go to the trouble of finding out what it was in aid of, but to be honest I’ve got better things to do. Anyone who knows, be a good sort and let me know. You can contact me at the address below. And while you’re at it, I’m always on the lookout for interesting properties in Wanstead, Snaresbrook and Aldersbrook. Not to buy, you understand, lorks no. Just to talk about.

UPDATE, 8 June: Wansteadium reader Ray has no time for Kinesentimentality. “All the talk about save the Kinema from the Visigoths who want to build flats for people to live in – I bet if you ask a hundred people in Wanstead where the Kinema was, only a handful would know and even less would care.
When was the last film shown there and what was it?… Come on wake up if the Kinema was running up to last week then yes okay save it but its not been for donkeys years.”

Meanwhile, fellow reader Lisa sheds some light on the drill. “This piece of land was sold through Strettons Auctioneers quite a few months back and there were plans to build 3 terraced houses with off street parking. I am sure that as work appears to have started plans of some sort are finally going ahead. I am sure there will be more info on the Redbridge planning website. Hope that helps satisfy your curiosity