Look out Wanstead estate agents! There’s a new fox on our blocks. Householders have recently been leafletted with enticing introductory offers by the newly-established Stratford branch of Foxtons.

While the Mini-wrangling marketeers have both admirers and detractors, nobody can deny the reach and the buzz that their business has built up over recent years. I’d bet my last Monopoly fiver that these guys’ arrival on our doorstep will increase the exposure of Wanstead properties to a greater number of interested buyers.

Lucky for them that they’ve managed to kick off with a property that simply deserves to be seen by the widest possible audience – take this beautiful Park Road home in Aldersbrook – a stunning adaptation of the classic Edwardian terrace. Four bedrooms, two bathrooms, gloriously sleek open-plan living, and a spiffing little garden room at the end of your sylvan glade. Most habitues of the Foxtons website will be goggle-eyed at the value that exists in this part of town!

The Grass is Sometimes Stepney Greener
People often ask me at cocktail parties: “George, with all the techno-distractions like e-mail, online messaging and Blackberrys, how does a mogul like yourself find the time for all the, er, mogulling that has to be done?”

Draining my glass and reaching for another stiff Tom Collins from the waiter, I always reply that the answer is a good invigorating run. There is no overload of meeting requests and message that cannot be overcome by simply lacing up the trusty Dunlop Green Flash, firing up Churchill’s Greatest Speeches on the iPod and beating the bounds of one’s beloved Wanstead.

Normally I just shoot around our excellent parks until the internal fog clears, and I am ready to deliver another commercial blockbuster of a decision. However, on occasion I require extended periods of rumination and have been known to pootle right across the Flats and all the way up to the City, a solid jog of about an hour from Wanstead.

In recent times this route has kept me up to speed with the incredible transformation of Olympic Stratford, and also the parallel decline of less topical parts of the East End such as downtrodden Stepney. Until now that is! Thanks to the English Heritage High Street 2012 programme a row of once-grand shopfronts (described in the article as ‘opposite the landmark former Wickham department store’) are being restored to former glories. 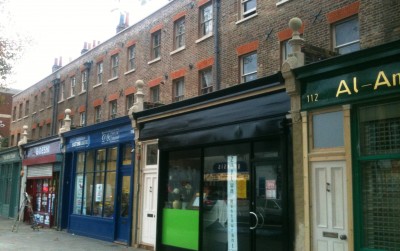 Having jogged thence from E11, my interest was naturally piqued by the similarity of these buildings in age and standard to those in Wanstead High Street between Santander and 62 Spice. As these proud properties regain their poise and elegance, I returned to the site and produced a ‘then and now’ photograph, above, showing the incredible effect that the work is having on improving the character of the area (and the desirability of the flats above the shops).

Dedication time
Finally, I wish a warm welcome to reader Aadil who is sagely leaving South East London behind and moving up to Wanstead’s greener pastures this month. Thanks for the e-mail!

2 thoughts on “Wanstead property update: One reason Wanstead houseprices might go up”