Council tax frozen, Snaresbrook Tube ‘cinema’ grows, and who’s that outside the Co-op?

• The commander of Redbridge Police, Detective Chief Superintendent Sue Williams, is inviting residents to ask her questions via Twitter on Wednesday 14 March between 3pm and 4pm. Wansteadium will post some of the questions and answers here in case you miss the event.

• The supposed cinema at Snaresbrook Tube, which has been much tweeted in recent weeks, is likely to have been a touch disappointing to anyone who came to E11 specifically to see it. As hardened commuters from here will know, it’s not quite a cinema, and it’s only when it’s one of the station staff, Malcolm Parker, on rota. Wansteadium has wondered how long it will take someone in head office to notice, but the signs for this charming distraction continuing are good (literally, & thanks to Alan Perryman for the photo).

• Council Tax in Redbridge has been frozen for the third year in a row, following cost cutting by the council.

• While residents are celebrating the news that Wanstead CC’s Overton Drive grounds are not now to be used as a 500-tent campsite for Australians visiting the Olympics, the club itself is having to recalculate without the money this would have brought in. Also it will mean fewer Australians being around Wanstead, which is either a good thing or a bad thing, depending on your point of view.

• There was a fire in Aldersbrook above a chip shop whose opening was celebrated in Wansteadium last year.

• Photo of the week, as taken by Wansteadium regular @nutterlane Dan. 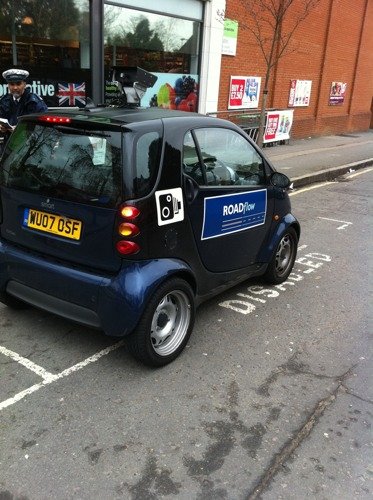