• The rather novel parking regulations recently introduced on roads south of Christ Church Green, which mean that both sides of Spratt Hall Road are reserved for residents’ parking (even though there are houses on only one side) resulting in the road being virtually deserted for several hours each day, even as Wanstead retailers cry out for customers, are apparently to be reviewed. 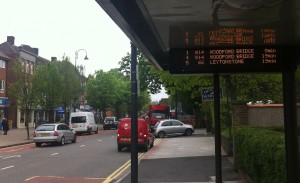 • Bus arrival information boards have been installed at some bus stops in Wanstead, though it seems their use is mostly observational rather than forecasting… ie if you’re waiting for a W12 it might or might not take the six minutes the sign indicates. It might come right away, or it might be stuck at six minutes for the next 10. Other reports are welcome.

• On an incidental but unrelated note, the newly completed pavement on the south side of Wanstead High Street is a very nice job indeed.

• If you want to collect a bit of Wanstead history, you might like to buy the pews currently being removed from the former Cambridge Park Methodist Church, which is being converted into a nursery. They’re on sale on eBay here. 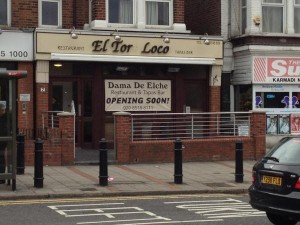 • Richard Foster (@fozzie23) sends this photo of what promises to be a new tapas restaurant in the place of the missed El Toro Loco on Cambridge Park. Dama De Elche basically translates as Benidorm Bird, but actually refers to a statue from the fourth century BC.

• Two crime updates. Beware number plate thiefs – people removing plates so they can steal petrol from filling stations. There’s been a spate of thefts in the Counties roads. And there’s a report from one Wansteadium reader a daylight mugging taking place in Sylvan Road.

• And hedgehog update no. 1: Stavros Fotiadis writes that he saw a hedgehog on Friday afternoon at the north side of Wanstead Park, near Royston Gardens. He says: “A man I crossed paths with warned me his dog had just had a close encounter with a hedgehog. A couple of hundred yards further I came across the young hedgehog on the track, immobilised and listing to one side. Have a bad feeling it had been critically mauled, there was nothing I could do.”

• Facebook might be worth a hundred billion dollars. But that doesn’t mean there are never technical hitches. So if you are among the 300 or so people who “liked” Wansteadium on Facebook and thus got our updates in your newsfeed, you will need to “like” us again. It’s easily done…