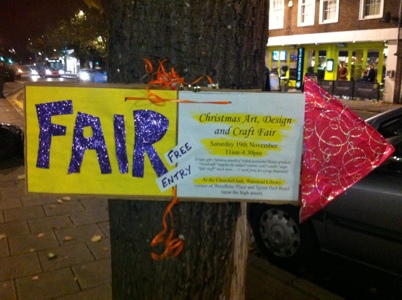 â€¢ Plans to install a cycle lane across the middle of Christ Church Green, which had been opposed by some users of the park, were criticised at the Area One committee on Monday. More details from Wanstead Guardian.

â€¢ The number of 18-24-year-olds registered as being out of work in the Leyton and Wanstead constituency rose from 100 in January to 245 in September, according to the ONS.

â€¢ Shops in George Lane, led by Suzanne Bennett of Sid and Evie’s, are planning price cuts on Saturday 3 December as part of a campaign to persuade locals not to do their shopping at Westfield.

* Could the Olympic torch relay come down Wanstead High Street? The final route is not being announced until the Spring, but the torch will be making its way from Waltham Forest to Barking via Redbridge on 22 July next year, and the council is planning to put 48 Olympic banners on lampposts on the High Street and Cambridge Park. So it’s a maybe.

â€¢ And the best news of all is that, though the renovations at the former Andrews’ Builders’ Merchants are going on (the iconic wooden sign sadly ended up unloved in a skip), Wansteadium is pleased to announce that you can now build your own, so long as you don’t mind it being about two inches tall, made of cardboard, and self-assembly. Collect one of these exclusive, limited edition (and yet somehow free) postcards from the Larder. Hurry while stocks last. 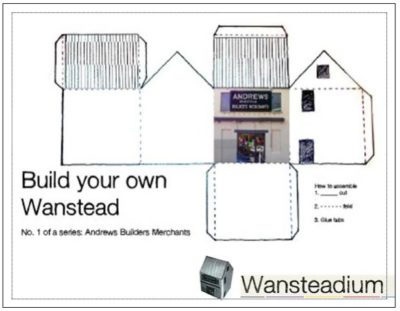 Anyone can add an event to the Wansteadium Events calendar by sending details to events@wansteadium.com. Wansteadium now has more than 1,000 regular followers in Wanstead so it’s a great way to let people know what’s going on.