Wanstead children’s shoe-shop owner Rina Henry has told how bailiffs emptied her shop of Â£30,000 stock over a Â£193 debt. 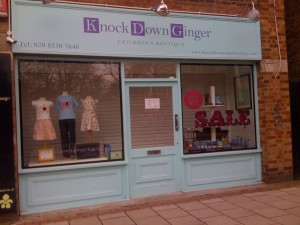 Rina, of Knock Down Ginger on Wanstead High Street, told the News of the World that she was handcuffed by police who she had called to help her.

CCTV footage shows Rina collapsing in a panic attack. The paper says the footage, which it shows on its site, “shows slightly-built shop boss Rina Henry restrained by two police officers she called in to HELP HER, as bailiffs carry her cash till out of the door… Bizarrely, it then captures a bailiff and a policeman shaking hands on a job well done.”

UPDATE 2200GMT: Rina Henry tells Wansteadium: “Thank you for your kind wishes. The shop is back in business!”
More details coming on Tuesday.