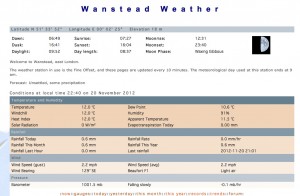 It’s a big welcome to a new weather website for Wanstead, wansteadweather.co.uk, run by @wanstead_meteo, aka Scott, whose tweets will have become familiar to those of you who keep an eye on the right hand side of Wanteadium pages.

His new site, drawing on gauges, meters and whatnot at his home in Aldersbrook, displays a huge amount of observation material and Scott’s tweets also offer his thoughts about what is in the pipeline. As well as having launched his new site, he will be writing regular articles here on Wansteadium too.

It seems clear that as affordable technology makes very localised monitoring possible that the weather can become more of an obsession than it already is. Wansteadium, for instance, has long harboured ambitions to map the microclimates of Wanstead (is the Nightingale Estate colder than the Counties? Are roads around Wanstead Park frostier than those in Snaresbrook?), and Scott confirms there is something to get one’s teeth into here.

“I’ve lived in the area since around 1997 and only realised that Aldersbrook, where I have been since January this year, is in a frost hollow,” he says. “The other night it was 1.7C colder here than in Woodford Green and probably Wanstead village too, though there’s no way of checking. The other night there were thick fog patches on the Flats yet nothing elsewhere. Very eerie.”

We’ll let you know if we get a microclimate scheme off the ground, but in the meantime, Scott has some data about windchill, solar radiation and evapotranspiration which you may be interested in.