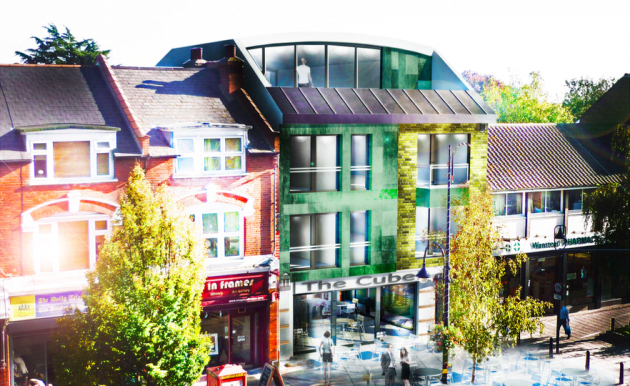 A new plan for a mini-shopping mall on Wanstead High Street could be determined this week in a decision which could apparently sidestep the Redbridge planning authorities.

A plan for the former Joliffe’s Builders office site, which includes a large area of undeveloped land behind the shops, was rejected by the local authority last year. But the revised plan – which includes the front being clad in copper and aluminium – is to be considered by the Planning Inspectorate, a government agency which deals with planning appeals.

The Wanstead Society has written to its members saying that while it does not oppose the development of the site, the plan is “over-developed and with a boxy, high rise, design that would stick out in our Conservation Area”. It also says the “yellow stock brickwork and copper cladding… bears no sympathy with the subdued nature of the existing high street”.

The developer, in the documents, say the revised plan would mean the building frontage would be smaller than it would have been in the original plan, and addresses fears over existing trees. It says: “The resulting scheme seeks to add to the exciting village nature of Wanstead by providing letable units for local business, artists, entrepreneurs at an affordable starter rent, whilst creating a new adjunct to the street around a focused mall and courtyard hub, and new eco styled apartments within the village and related to this new hub.”

The plans go on to describe how the design would fit in to the area:

A diverging array of architectural styles can be found around the site, including the rather poor quality adjacent Pharmacy building at No.75. The stylesâ€™ varying from Edwardian to 80â€™s built shop units. The Shrubbery is a grade II listed, inter-war period, modernist movement, residential building. In the previous application it was our intention to enhance the aspect to this building and to use elements of its â€œbrave new worldâ€ iconic architecture to form the keystone of the new scheme, in effect providing a link between this buildings uniqueness and the High Street and ensuring its privacy by reinforcing the buffer between with a mature landscaped, amenity space… The current scheme has thus embraced this as its core, and seeks to create a first class building that is carefully crafted to its specific location and has quality and unique materials within its design that relate strongly to the conservation area and the immediate context of the site.

The plans can be seen in full on the Redbridge planning website under reference 4102/14. Representations can still be made to the Planning Inspectorate, but only if they are received in Bristol by 1 July (ie Wednesday of this week).