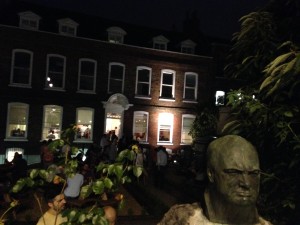 It’s nearly the 50th anniversary of Winston Churchill’s death – on Saturday to be precise – and to mark the event, Wansteadium has been selflessly reading David A Thomas’s book Churchill The Member for Woodford, and blogging about it.

Episode five: Wanstead and Woodford applied to be a borough in its own right, and Churchill backed the bid. It came into being on 14 October 1937 with big ceremonies – bells pealing from St Mary’s and Christ Church. To mark it, Churchill presented the new borough with its own ceremonial mace, and when Redbridge was formed 50 years ago this year the mace passed to the new borough. It is still occasionally shown off by Redbridge mayors.

Thomas reports that the local paper, the Express and Independent had adverts for Puddicombe the Furrier, the department stores of Boardman’s of Stratford and Bearman’s of Leytonstone.

Churchill continued his warnings about German rearmanent, and some constituents and countrymen were beginning to find it irritating, Thomas says. But information reached Churchill from Berlin that the German press was too beginning to get annoyed with him, which probably just convinced him he was right (not that he needed any convincing). In some ways he was a bit painful – his secretary Violet Pearman complained that he had taken over her life with “an inexorable grip dominated by his moods, whims, fancies and crises”.

Hitler then annexed Austria and occupied most of Czechoslovakia. Mussolini then invaded Albania. Churchill’s warnings were coming true. Local papers here prepared their readers for war, printing guides for how to make a room gas proof and how to make a bomb proof shelter in the garden. (Some Wanstead gardens doubtless still show the marks… let us know in the comments if yours does). Wanstead and Woodford was, however, praised as one of the few boroughs which was properly preparing itself for war. With the number of speeches its MP had been making on the subject, it probably had little choice.